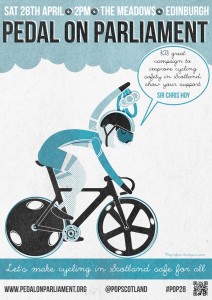 Like millions in Scotland and beyond we are saddened to see Sir Chris Hoy announce his retirement and we wish him well in whatever he chooses to do next. Whether you’re an avid fan of cycle racing or just an occasional spectator at the Olympics, Sir Chris has proved himself Britain’s greatest Olympian – and well worthy of the honour of having the Glasgow Velodrome named after him.

Sir Chris was an early supporter of Pedal on Parliament last year (hence our slightly out of date poster where he ‘only’ has five medals) and we’re pleased to see him publicly supporting us again. In response to the Edinburgh Reporter‘s question about whether he’d make it to POP this year he said

“If I am around in May I would love to. It is a great campaign which I have supported in the past with messages of support. I am quite busy at the moment but that is not an excuse. I would hope to be there!”

Sir Chris, it would be an honour