Following on from Henry Whaley’s post on why he joined Pedal on Parliament, Sally Hinchcliffe, one of the original organisers, explains why she’s supporting the campaign. There have also been some great posts elsewhere: from Keith Irving of Living Streets, Kim Harding (another POP organiser), Cycle Law Scotland, and Wisob 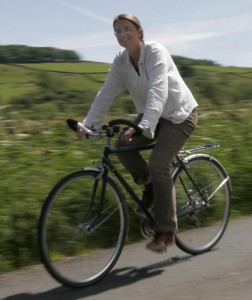 It seems to be unfashionable to admit it these days, but primarily I cycle because it’s the green thing to do. I’ve always been concerned about the environment – from worrying about the oil running out in the 70s, followed by the dawning realisation in recent years that with global warming we were doomed if the oil didn’t run out. If you’re green, the bike does seem to be the obvious mode of transport – not only does it cause almost no carbon emissions, it also means building fewer roads (remember Twyford Down?), encourages people to shop locally, keeps you in touch with the environment around you, and is generally low impact, frugal, simple – everything the average environmentalist like me could possibly want to get me from my allotment to my yoghurt weaving workshop and home to my wood-fired yurt.

That’s also why I joined POP. I know that if I want to save the planet – and I do, it’s the only one we’ve got – then it’s not enough for me to cycle instead of driving, and it’s not enough to encourage my other green friends to cycle. To get to levels of cycling that will actually make a difference (levels like Denmark’s, say – if everyone in Europe cycled like the Danes, carbon emissions from transport would fall by 25%) then pretty much everybody needs to cycle, at least for the short journeys of under 5 miles (which is most of them), instead of getting in the car. There are lots of very difficult problems to solve in order to decarbonise our economy, but ‘how to get more people cycling’ is not one of them: amazingly, we actually know how to achieve this – and it’s got nothing to do with telling them to save the planet. We know from the Netherlands, we know from Copenhagen, we know from Seville, we even know from the English Cycle Demonstration Towns – that if you start to build a dense network of safe, direct, convenient and pleasant cycle routes that keep people away from cars and lorries, that make riding a bike faster and more convenient than driving, then they will cycle. Not because they want to save the planet, but because it’s handy, it’s simple, it’s cheap, it’s healthy and it’s fun.

Personally, I don’t understand why we have to campaign for this at all – given the problems of health and obesity that Scotland faces, and its commitment to deep cuts in carbon emissions – you’d think the government would be rolling out cycle tracks across every town and city in Scotland, instead of attempting to build dual carriageways between them all which is what their policy is instead. And yet it seems they don’t see it, and so we have to keep telling them until they understand and hope it’s not too late to see off a catastrophic change in our climate

And that’s why I’ll be in Edinburgh at 12 noon this Saturday, on my bike, as I have been for the past two years. Because the alternative is too scary to contemplate and I refuse to give up hope.

Sally Hinchcliffe – why I joined POP