Continuing on from Henry Whaley’s and Sally Hinchcliffe’s posts, Dave Brennan explains why he started Pedal on Parliament. We’ve also been getting some great tweets from you all about your reasons for coming to POP, which we’re collecting here – keep them coming! 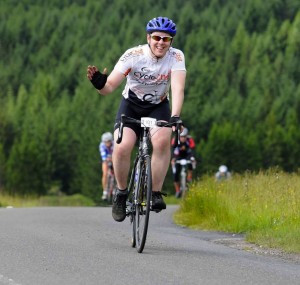 It was back in 2004 when my wife was pregnant with our first child that the question first arose in my mind – what happens when the baby is born?

This is a question that all parents ask, and it covers many issues that new parents face. Where will the baby sleep? What type of nappies should we use? What cot should we buy? The questions are endless. However, the answer to one particular question, it transpired, had a profound affect on my life ever since I asked it:

How will I get to work when my wife keeps the car at home?

I could have bought a car, though money would have been tight. Public transport wasn’t really an option, it just wasn’t direct enough, cheap enough or fast enough to get me to work on time. There was another option…..

Inspired by the birth of my first child (I now have three!) I decided to ride a bike to work.

Cycling to work was brilliant. I absolutely loved it and was hooked from the beginning, despite having a tank of a bike. Slowly I progressed from cycling a couple of times a week to every day, and whilst I was already reasonably fit at the start, I felt a significant improvement in my fitness in that first year.

All was not well though. I discovered, as nearly all of us do that cycling on the roads comes with some downsides. I quickly realised that not all road users gave me room or respect, either through ignorance of what I needed or, on the odd occasion, out of a dislike for cyclists in general. These incidents occurred despite the fact that I avoided the busiest roads and on occasion took to the pavement. In 2005 there were very few cyclists on the roads of Glasgow (there are more now, but not many) and I felt like a salmon fighting against the current.

Was there anything I could do to demonstrate to others what it was like cycling on Glasgow’s roads?

It was June 2006 that I first strapped a mobile phone to my rucksack and I produced my first cycling video. I didn’t know it at the time but from that was the beginning of my cycle campaigning. My online persona, Magnatom was born.

Over the years, through experience and review of my helmet camera footage I have became better at negotiating heavy traffic. Far from perfect, but better. I stopped cycling on the pavements and I started cycling on some of the busier faster roads as I felt more confident in my cycling. I also moved to a new house further from my work, meaning my fitness improved further.I enjoyed my commuting, with the odd exception and had built up the skills necessary to cycle on Glasgow’s roads in a way that I felt was safe.

I was a vehicular cyclist, happy to use the roads as they were and I very much believed:

I truly believed that with a bit of eduction all road users could co-exist on the roads as they were.

Then something happened. My oldest child learned to ride his bike.

I was as proud as every parent is at that moment. For the first time my son, zooming up and down the cul-de-sac with a huge grin on his face was experiencing a sense of freedom, a freedom of movement. It was only later when I came down from the high, that it struck me.

Where exactly was he free to travel? Around the cul-de-sac? Yes, with supervision. On some of the local pavements? Yes, probably with care. Anywhere else? No.

I realised that there was no amount of education that would encourage me to take my son on any of roads surrounding us. Even if every driver took the upmost care when driving around us (and some certainly don’t), it just didn’t feel….safe. I was shocked to feel this way, considering I had been cycling to work for 4 years. How could it feel safe for me, but not my child?

After much soul searching I realised that I had built up over the years a skill set to ‘deal’ with the situations I faced on the roads. I had worked out my preferred road positions at different points on my commute. I had worked out the more difficult sections where issues were more likely to occur and devised methods to counter the issues. I had even changed my route if I felt that certain sections were to dangerous. Yet, I hardly noticed that I was doing these things. I just adjusted, as and when required. Little bit, by little bit.

I cycled despite the conditions, not because of them.

It took my son’s vulnerability for me to realise that whilst I was willing to put up with the conditions, many others wouldn’t, couldn’t and shouldn’t have to.

It was time to change the conditions,  not to teach my son to adjust to them.

I didn’t help to set up POP for me. I am part of the 1% who perhaps don’t need it. I helped to set up POP directly as a result of my children, because I know for a fact that they and the vast majority of the population of Scotland need it.

I am proud to say that all three of my children can now ride bikes (my daughter who is four is very proud of herself of being able to ride a pedal bike this year!). All three of them will be at POP, and perhaps, if he doesn’t get stage fright, my oldest boy, my initial inspiration for cycling and for setting up POP, will say a few words during the speeches at Holyrood. After all, POP is for him, his brother and sister and the majority of the people in Scotland.

Dave Brennan – why I joined POP