In the run up to POP, we’re asking supporters to tell the world why they’re Pedalling on Parliament on their sites (there’s a great post here from Back on My Bike for example) or here. Henry is one of our newest recruits to the POP organising team. Here he explains why he’s joined us. 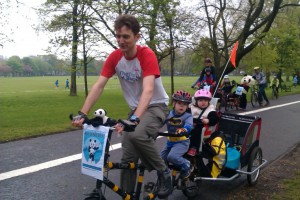 I’m a regular cyclist in Edinburgh, having cycled to work for 8 years.  It began as a better alternative to the two-bus journey to work and has now developed into part of family life.  I drop my 2 young kids off at nursery each morning, and take longer leisure rides at the weekends.  We still have a car as a family, but I now try to avoid using it unless I have to.

I started campaigning after realising that a local problem road, which was deterring colleagues from cycling to work, wouldn’t get its surface fixed unless a fuss was made; previous polite complaints didn’t seem to be working.

Getting into the detail, I discovered that the local road repair policy focussed on cars, disregarding the needs of a significant proportion of road users and ultimately preventing getting the road fixed.  Pot holes would only count if they were over a certain depth.  Road assessments only took into account the safety of pedestrians and the comfort of drivers.  No weighting was given to cyclists’ safety, or the difficulty that the lumps & bumps caused to cyclists travelling on a narrow & busy road. There was no additional weighting for strategically-important cycle routes, so without change this road was never likely to get fixed.

The penny dropped. Whilst we are seeing some increases in funding for cycle infrastructure and positive noises from politicians, there is so much more that needs to be done if any meaningful improvements are to be achieved.  We are all so used to the “car being king” that even considering cyclists, let alone safeguarding them, is an alien concept.

I lived in Cambridge for a few years and have seen what can be achieved where there is real commitment to cycling and active travel.  Cycling was an easy way to get around – comparing that to sitting in traffic showed that it can be a valid alternative for a lot of people.

Here in Scotland we can change things for the better, but only if we get the message across to politicians that we want it to change.  PoP is helping with that message and with enough support politicians will listen – they’ll have to if they want re-elected.

And that road – well, we’re nearly there.  The council are due to resurface it this year and are looking into putting in cycle lanes when they do.  I look forward to this small victory and many more like it.

Henry Whaley – why I joined POP