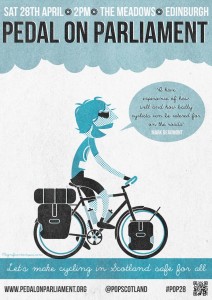 Pedal on Parliament is very pleased to announce that Mark Beaumont, who has previously provided the campaign with moral support, has now announced that he will be attending the event in Edinburgh on the 28th April. Mark, who is famous for cycling around the world in record breaking time, and his other ongoing adventures said:

Having cycled many thousands of miles around the world and experienced roads in many different countries, I have experience of how well and how badly cyclists can be catered for on the roads. Whilst cycling in the UK is a safe activity, it could be safer. That is why I am joining the organisers of Pedal on Parliament on the 28th April to ask our politicians to make cycling safe for everyone. The three mile ride from the Meadows to Holyrood might be short, but the effect on cycling in Scotland could be profound

We hope you’ll join Mark, and many hundreds of others on the day for our family-orientated ride. Or even if you can’t, please sign our petition and write to your politicians to ask if they are supporting our eight point manifesto. With your help, we can make Scotland a cycle friendly nation.

Mark Beaumont to Pedal on Parliament too!

One thought on “Mark Beaumont to Pedal on Parliament too!”