Low traffic neighbourhoods have been in the news recently. In this guest post, Ewen Maclean of Blackford Safe Routes explains the benefits of the latest proposal in Edinburgh. NOTE this article has been corrected to better represent the position and motion by Councillor Neil Ross.

In response to the Covid pandemic, the Scottish Government set aside money for councils to create infrastructure for safer walking and cycling; including while distancing. This infrastructure includes widened pavements and “pop-up” cycle lanes but, more ambitiously, some proposals for Liveable Neighbourhoods (or Low Traffic Neighbourhoods). Liveable Neighbourhoods are designed to cut rat-running and make residential streets safer, encouraging active travel. The team responsible for implementing these measures in Edinburgh Council is the “Spaces for People” team whose proposals can be seen on their website.

One LTN proposal is a quiet route, known as the “Greenbank to Meadows Quiet Route”. This route is a subset of the designs we at Blackford Safe Routes originally put forward for Sustrans funding consideration in 2019 which can be seen in more detail on our page and explored via the interactive map here:

Blackford Safe Routes only became aware of this somewhat by accident when the Liberal Democrat councillor for the Morningside ward, Neil Ross, sent the designs round in a leaflet to local households, encouraging people to write to the Council requesting a public consultation. This was voted on and his motion to hold a consultation was rejected by the council on the 17th September by 32 to 25 with 1 abstention. 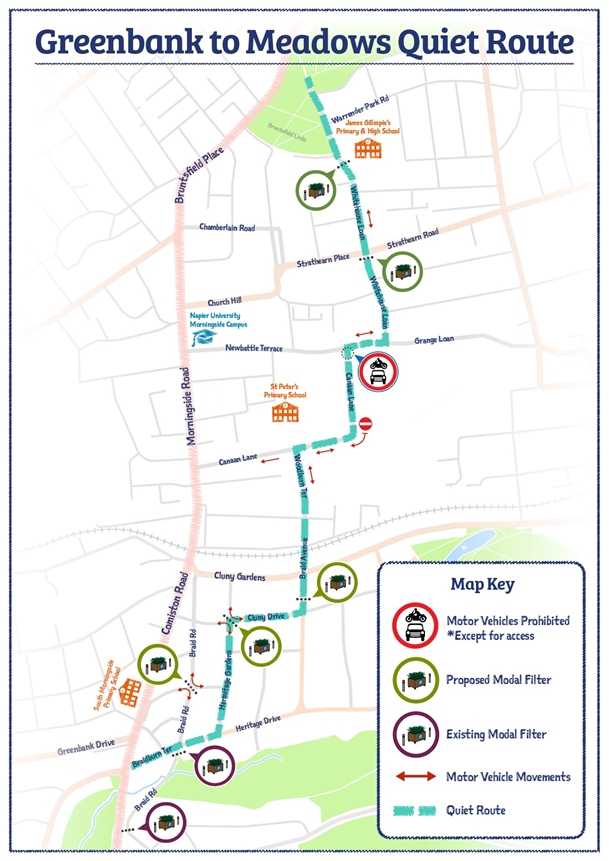 One of the driving motivations for creating our Liveable Neighbourhoods designs was to make the streets safer for children to walk and cycle to school. Currently, some routes to our local primary school are so dangerous that many of the parents who would otherwise cycle or walk feel too scared by the traffic risk. This compounds the problem of excessive traffic volume, particularly around the schools. In order to provide some opportunity for the kids from the parts of the catchment with the most dangerous roads, we set up a bike bus, described in an earlier guest blog.

The bike bus provides good evidence of the desire of many families to cycle to school. We designed our own Liveable Neighbourhoods plan to incorporate the bike bus route and submitted the designs to Sustrans who responded positively and initially confirmed feasibility funding. This funding is now on hold on account of the Covid 19 pandemic but a subset of these designs now constitutes the Greenbank to Meadows Quiet Route. Our plans incorporate a number of implementation and design features including:

The Greenbank to Meadows Quiet Route increases the safety of journeys to 4 primary schools, 2 high schools, 2 independent schools, and a number of area nurseries. The catchment of many other schools also adjoin the route and providing more opportunities for families to walk, wheel and cycle to other locations in the South of the city, such as the Hermitage of Braid. The school whose routes directly benefit are

Now that many parents are working from home due to the Covid 19 pandemic, the Greenbank to Meadows Quiet Route provides a safe alternative to and from school when no onward journey further afield is required. This provides a perfect opportunity for “traffic evaporation” where parents who would ordinarily drive to school are given a safe active alternative. We have been told by our bike bus parents that many people who drive would cycle from the Blackford part of the catchment if they felt the roads were safe enough. For older kids, not only would they benefit physically and mentally from the exercise from active travel, but also from the independence of travelling to school on their own, with confidence that their route to school is safe from otherwise prohibitively dangerous traffic levels.

It is important that the voices of people who support the community-based aims of Liveable Neighbourhoods are heard, particularly as we are starting to see disappointing backlash against similar schemes implemented around the country emerge. The positive benefits of the quiet route include:

A good information article answering some often asked questions about Low Traffic Neighbourhoods can be found in the latest Spice briefing for the Scottish Parliament.

Can you help Ewen and others who want to reclaim their streets? Please contact your local politicians – councillors, MSPs and MPs to let them know that you support such schemes (even if you don’t live in the area or even in Edinburgh. The more requests they hear for LTNs, the more likely they will be to support them. You can easily contact them through Write To Them.

Liveable Neighbourhoods: Returning the streets to the people