Last year we had a few ‘bike buses’ among our Pop-Up PoPs – it’s an easy way to get a whole community involved in raising awareness about active travel. In this guest post, Ewen Maclean of Blackford Safe Routes explained how their bike bus got started and the impact it has had both on the school and more widely.

If you ask most parents who drive their kids to school why they don’t cycle, they will tell you that the roads are too dangerous and they don’t feel confident having their children riding on the road. We can all entirely understand, but we need to find a way to overcome this problem. The benefits of travelling actively, whether walking or cycling are enormous for children – there are hundreds of studies done to demonstrate the advantages both physically and mentally (see here for example). We already know the potential long-term benefits of active travel to the economy, so how can we persuade our politicians to expedite the vital changes needed in our infrastructure? Having spent a reasonable amount of time speaking to MPs, MSPs and councillors and banging our heads against the wearisome inertia of the status quo, we at Blackford Safe Routes – the travel committee of James Gillespie’s Primary School in Edinburgh – decided to run “Bike buses” every fortnight. The idea was to provide a safe way for kids to cycle to school from those parts of the catchment where the roads are particularly dangerous, and also to demonstrate a very identifiable need and demand for safe cycling infrastructure.

The first bike bus in Edinburgh was set up by Sciennes Primary School, with the support of Angela Christie and teachers such as Jenni McGrouther who saw the benefits to the children. We became aware of it through Twitter and decided to set up our own.

We decided to make a big event out of the first one to try and get as many people coming along as possible, running a bike breakfast supported by local shops and bicycle shops and inviting significant local politicians and officers such as Lesley Macinnes and Daisy Narayanan as well a Professor Chris Oliver (the Cycling Surgeon) and Active Travel Commissioner Lee Cragie in an event covered by the Edinburgh Reporter.  We relied heavily on the expertise of those in Sciennes to get started.

We have produced a set of guidelines on how to run one but simply put, a bike bus simply involves a large group of children all cycling together with designated ride leaders at the front and the back. Parents are encouraged to cycle on the outside of the group, while the lead rider keeps the group together and the rear rider protects the group at the back. This gives children who don’t otherwise have the confidence to ride on the road a safe space to do so. Our policy is to be as inclusive as possible – every child of every size and ability is encouraged to join the bus as long as they have a designated parent or guardian with them. 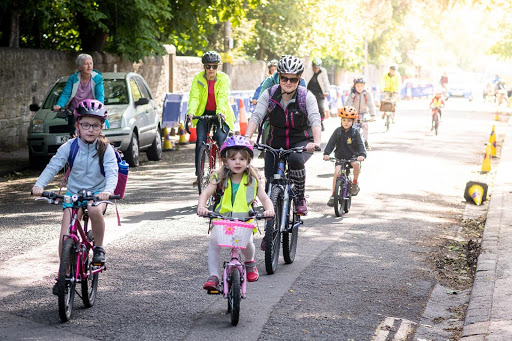 No rider is ever left behind; we take the opportunity to regroup at the Astley Ainslie Hospital exit where the staff very kindly open up the old gates. Slower children are then encouraged to come to the front in order to tackle the following hill at the front! 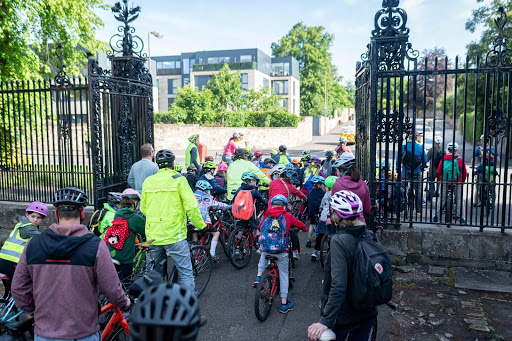 When we arrive at school we travel across Bruntsfield links in order to thin out the group so we can all arrive through the gates in some sensible fashion and lock bikes up. 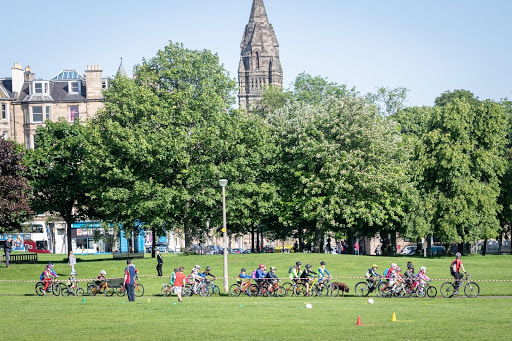 Cycling together in this way is not just efficient and environmentally beneficial – it brings a sense of community and well-being.  This is evident not just in the joy of hearing the kids chatting and joking, but seeing parents enjoy a sociable community activity together. There is a sense that the kids are all our collective responsibility and it removes the isolation of travelling by car. The kids who do it always ask when the next bike bus is, and even some adults tell us the bike bus has given them the confidence to ride when they felt too vulnerable before.

Pedal on Parliament itself has been instrumental not only in encouraging and providing a platform to encourage bike buses, but also every ride we do usually has one or two members of the cycling community who have all been brought together by the shared aims of Pedal on Parliament and the CityCyclingEdinburgh Forum.

Impact of the bike bus

At Gillespie’s we have plenty of anecdotal evidence that the bike bus has had an impact. The bike racks at school are very often full most days – parents comment that it is harder to find a space. The number of cyclists on the bike bus route has very visibly increased on non-bike bus days, and we have reports that some parents now cycle thanks to the increased number of cyclists going to school.

The bike bus has also motivated us to create a design for our local area based on the “Liveable Neighbourhoods” model of Waltham Forest, involving the introduction of modal filters and continuous footways. We received Sustrans funding to perform a feasibility study and match funding from Edinburgh Council for the construction of the project. This work is ongoing, but the evidence provided by the bike bus of the very clear need for safe infrastructure was seen as a strong contributing factor to the success of our proposal. 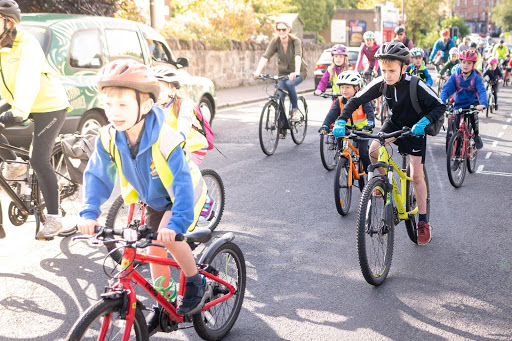 At the time of writing, there are now six bike buses that we know of in Edinburgh, all following a similar model. It would be brilliant if they became so commonplace that drivers recognised it and acted accordingly. If anyone wants help setting up a bike bus or wants to join any of the existing ones please get in touch

If this has inspired you to consider running a bike bus – whether as a Pop-Up PoP or more generally, please drop us an email on hello@pedalonparliament.org.

The Rise of the Bike Bus: Community active travel