In another guest post, Henri de Ruiter explains why he’ll be pedalling on Aberdeen:

Why we ride in Aberdeen

I would never consider myself an activist of any sort but, this time, common sense dictates that I join Pedal on Parliament. Previously, Pedal on Parliament was safely 127 miles away, making it easy for my activist spark to die out but, now, PoP has arrived in Aberdeen and is here to stay. So here are two reasons why I will Pedal on Marischal (the Aberdonian version):

The first reason is a personal one. As I grew up in the Netherlands, cycling is so entirely normal for me that it still feels strange to advocate for it. As a teenager, I cycled to football training from one end of the city to the other end. It did not matter whether it was dark, light, raining, or sunny; we just cycled. The only thing my mother worried about was how dirty the laundry would be when I returned, not whether I would return at all. We cycled to school, to music lessons, to football training, to friends – just everywhere. No parents or their cars needed. Here in Aberdeen, I would never let my child cycle from one side of the city to the other. One small mistake could kill here. 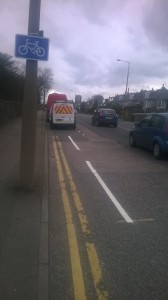 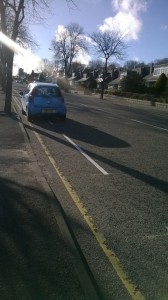 Aberdeen’s newest bike lane – on one of its widest roads.

So cycling is an enabler, especially for children. Though most cycling advocates stress the health and environmental benefits of cycling, for me cycling is about liveable, enabling cities – places where everybody wants to live and where children can play on the streets. Even in the US, arguably the car-loving country in the world, people want to keep cycle lanes once they are put in, because the vast majority agrees that their “neighbourhoods became more desirable to live in”. So why wouldn’t that be the case in Scotland?

Cycling is not about being fit; it is about creating a city fit for the 21st century

The second reason may sound familiar to our current policy makers. It goes like this: “You better start swimmin’ or you’ll sink like a stone / For the times they are a-changin’” Governments across the world have agreed to mitigate climate change, so cities need to move towards a low-carbon infrastructure and bikes will be an important part of that. Furthermore, 70% of our world’s population will live in cities in 2050, and people will be increasingly geographically mobile. As a result, cities compete for talent and businesses in a global marketplace. If Aberdeen, Edinburgh or Scotland wants to thrive, it needs to be able to attract people; hence an attractive cityscape will be vital.

More densely populated cities are needed, because “Generation Y” is different (more singles / fewer kids / more focused on experiences) and has other demands, such as work close to home and smaller apartments. The Atlantic recently reported that car makers are worried about these “Millenials” because they don’t seem to care about owning a car. So why build an infrastructure based on current preferences without talkin’ ‘bout my generation?

All these global megatrends point towards a future where more and more people will cycle. It is naïve to think that Edinburgh or Aberdeen are immune to these trends. After all, why would New York, Paris, Berlin, but also ‘smaller’ cities like Seville, spend hundreds of millions of pounds on cycling infrastructure?

It is an exciting time for Aberdeen, as a new city centre master plan is being drafted. Most people in Aberdeen recognise the many benefits of cycling, because they have asked for more cycling infrastructure at the master plan consultation. We are therefore confident that many people support Pedal on Parliament in Aberdeen, even if they won’t join us for the ride; though this is most likely because we need to cross a major trunk road before we can reach Marischal College. We will keep riding until that is no longer necessary and everyone can cycle safely into the city centre.

Why we’re pedalling on Aberdeen