Ben Raw of On Bikes organised a human bike lane pop-up PoP last year. In this guest post, he makes a powerful case for why it’s as much about inequality as it is about cycling.

As Frederick Douglass said, “Power concedes nothing without a demand”, it never did and it never will.

Last year, On Bikes @ St Paul’s Youth Forum, in partnership with the pupils of Smithycroft Secondary School, took part in the 2019 Pedal on Parliament (PoP) protests by organising a human cycle lane with volunteers from the local community, Go Bike and PoP. The protest was not just about the need for cycling infrastructure across Scotland, but to highlight the glaring inequality of how transport resources are shared out and to highlight what this means for everyone.

Young people and adults are told to eat five servings of fruits and veg a day and that obesity causes cancer. Patronising and offensive posters like this are just dealing with the symptoms and not the root causes of inequality and injustice, leading to poor and marginalised people being deemed lazy and undeserving. With the nearest supermarket often over a mile and a half away, many people in the North East of Glasgow are forced to rely on corner shops for their food. Getting to a supermarket – the shops that sell a wide range of healthy food – means using public transport but the bus is £2.50 one way, making it cheaper for a family to get a taxi. Unlike the west with its Subway and the south with its trains, there are no other forms of public transport – the train goes through Blackhill, but it fails to stop here,

If you do get to a supermarket in the North East, such as Robroyston Asda, you can see that the whole operation is set up for the car. This is remarkable seeing as the East and North East has the lowest car ownership in Glasgow! We have wonderfully wide roads running in and out of the city centre, such as Cumbernauld Road (the road we formed our human bike lane on). This means unlike some of the big cycling infrastructure projects in Glasgow, such as the South City Way, putting cycling infrastructure in the North East does not need to be an expensive and elaborate infrastructure problem! It can be cheap, easy and make a huge difference! 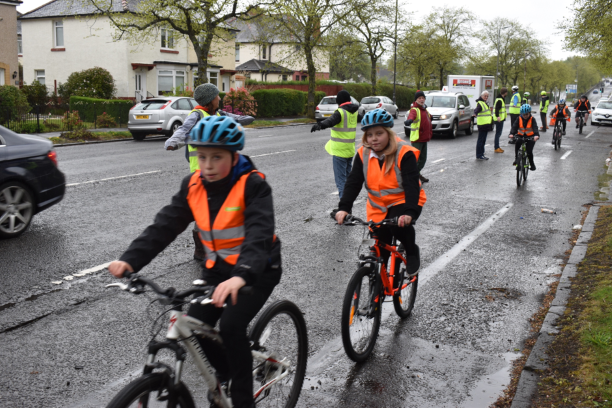 “The protest was good and showed that we should have cycle lanes because it makes cycling safer. I feel like the use of cars would be less in the North East of Glasgow. (Jack 13).”

Surely this means that these areas are a priority for Glasgow City Council, Sustrans and the Scottish Government? Absolutely not. The first map below shows the Scottish Index of Multiple Deprivation: the bluer an area is, the more affluent it is and the redder an area, the more deprived. The second map shows where cycling infrastructure currently is in Glasgow – almost an exact fit of the blue areas on the deprivation map. And yet Sustrans have just put £6.5 million into a pot to create a West End Cycling Village… 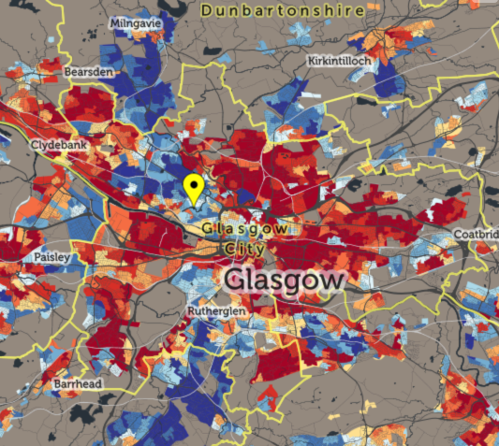 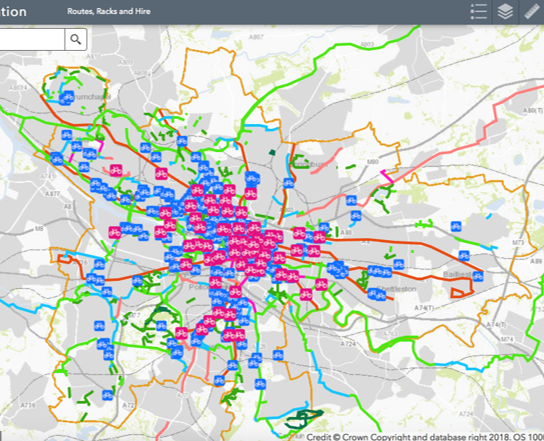 Yes, we want all cycle projects to be funded but decisions like these do not use the wonderful power of cycling to fight inequality, they embed it. Inequality affects us all just as the climate crisis affects us all. The more money available to cycling, the fear is that it will not be evenly and justly distributed across the city. A local Blackhill resident said, ‘I think the West End (of Glasgow) will get a segregated hover board lane before we get a segregated cycle path…’ 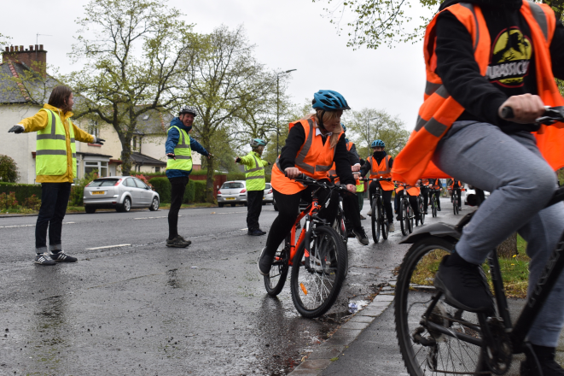 “The protest was a good idea because like a lot of people can get knocked down without them (segregated bike lanes) it can ruin a lot of people’s lives from getting knocked down … It’s also better bike riding because the cars are putting more pollution out there – if we are to stop cars it’s better for the environment because bike riding doesn’t cause pollution and it’s healthier.” (Kerry, 13)

According to Go Bike, our Pop-up POP was the first cycle related protest ever to be held in the East of Glasgow. During our protest, adults formed a human cycle lane so that young people from Smithycroft Secondary could feel what it’s like to cycle on a segregated cycle path safe and away from the traffic. We are currently trying to encourage young people to cycle to school, providing them with bikes, helmets, locks, maintenance etc. However, it feels like we are building on sand. To encourage behaviour change we need a safe and viable alternative. The parents and carers we speak to are worried about their young person cycling to school. The roads here are built for cars and not for cyclists or walkers.

Having surveyed over 400 pupils at Smithycroft Secondary, we see that the two major barriers are safe cycle paths and someone to cycle to school with. Both of these barriers can be overcome by safe and segregated cycle paths. 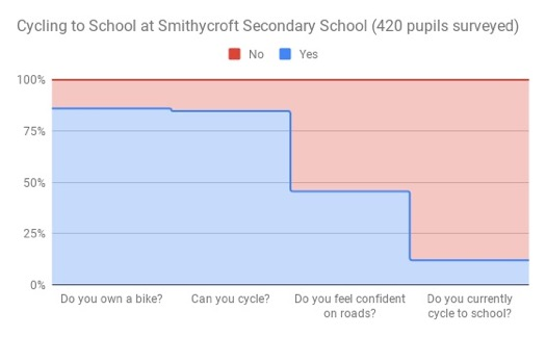 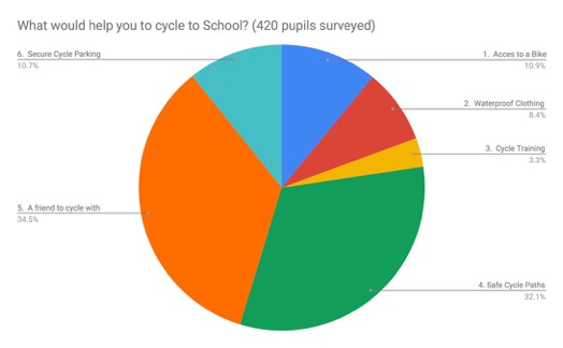 This protest on Cumbernauld Road on a rainy day in April last year may have been small. It was definitely not perfect with politicians not turning up (often through no fault of their own). However, it happened! We sometimes get bogged down with perfection we talk ourselves out of it! This protest gave us a little bit of publicity and a lot of confidence in starting to ask uncomfortable questions to power and lay down the mantra, you are with us or you are against us. In the fight against inequality and the climate crisis we don’t have time for the softly, softly approach. We need a bold and an exciting vision which includes everyone in the journey and doesn’t leave people to walk or cycle in dangerous and unsafe places. Ignore everything else I’ve written about, but give a PoP action a go, no matter how small or disorganised, you’ll be surprised by the results!

If you’ve been inspired by Ben to run your own pop-up PoP – particularly in an area or with a community that’s been overlooked in the past, get in touch – email hello@pedalonparliament.org to find out more.

Tackling inequality: Popping up in the East of Glasgow