Pedal on Parliament in Inverness – the second protest in the city following last year’s inaugural event – made for a great sight and noisy sound as around 100 people both on foot and riding a wide variety of cycles made their way across and round the River Ness to the headquarters of Highland Council.

At the end of the ride, the crowd was addressed by politicians representing all levels of government who put party political differences to one side to call for continued investment in active travel. 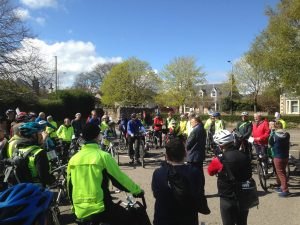 Drew Hendry, SNP MP for Inverness, Nairn, Badenoch and Strathspey, said, “It is important that we put people and places before motorised vehicles. We need to make sure we’re designing places for people, and that means putting more people on bikes.

“There is a great responsibility on the council to actually put cycling and the access to cycling at the heart of what they are doing. It’s really important that we not only put the focus on national politicians but also on local politicians to make sure that this is something they are thinking about on a daily basis.”

John Finnie, MSP for Highlands and Islands region, and transport spokesperson for the Scottish Greens, said, “I was delighted to see [the new cycle lane] at Cavell Gardens because the separation between cycling and motor traffic is very important. People do feel much safer with separation, and the other thing they feel safer with is lower speed of motor vehicles.

“We don’t want cycling to be for the suburbs, to be a “middle-class” pursuit. Everybody should have access to the training. We’re pushing at an open door. A lot of folk understand the health benefits. It isn’t a party political issue. [Pedal on Parliament] is sending a clear signal of the importance of cycling and you enjoy my continued support.”

“There have been many cycle paths built over the years and there’s a new one going in as part of the City Region Deal along Millburn Road – but there are many others needed.”

Organiser Mark Falconer said, “We had a great atmosphere and great weather. We saw many returning riders and new faces, and as ever there were lots of children riding along. For us bike geeks there was a grand collection of bikes on show including the Cycling Without Age trike, tandems, electric bikes, fat bikes, balance bikes, and roadsters from a few decades.

“Inverness has been blessed with the award of millions of pounds  of funding for cycling infrastructure which, whilst welcome, is only part of the equation and we still have a lot of work to do – potholes featured aplenty! All our speakers agreed that our quest to make Scotland a truly cycling friendly nation is not only admirable and desired, but doable with the right funding, planning and consultation.”

Thanks to John Davidson for additional material. His account of #PoPInverness is here: http://bl6.co.uk/wordpress/2018/04/30/politicians-unite-to-back-popinverness-campaigners/

#PoPInverness – a great sight and sound!