PoP’s chief marshal Bruce MacDonald, better known to some as Uberuce, will be leading the blue-vested PoP marshals this year. He writes:

Now that the time and relative dimension in space of PoP are settled, we do have an ever so teensy problem. The cyclists. Herding them is like herding cats. Perhaps it’s more like herding cats which have been let into a room filled with fireflies genetically modified to glow red like laser pointers and smell like catnip. This will require some management, and while the police are kindly and diligently going to ensure the aforementioned firefly room is free of motor vehicles, it’s up to us to guide them through it. This is where the marshals ride in. We just need more of them, so this is us asking now.

If you can commit some oddments of time here and there before the ride and all of your time on it, the you’ll know you’ve gone that extra mile for PoP. 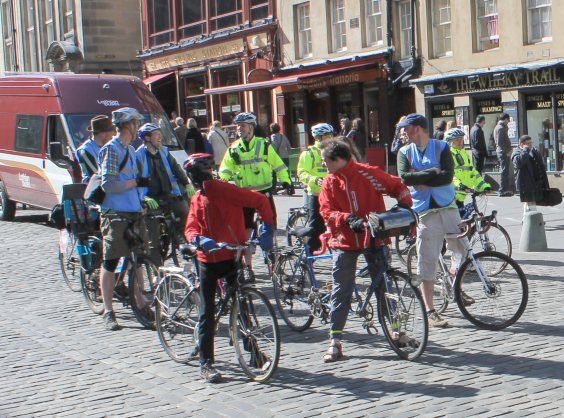 It will change your experience of the day, and because there will be briefings, route rehearsals and plans and suchlike it will require more involvement in the run-up than just keeping Sunday at 3pm clear, but the protest will not work without marshals. Before the day you’ll be learning the route and marshaling plan, if possible doing some dry runs in the weekends running up to the 19th; on the day you’ll be guiding the throng round the bonny streets of central Edinburgh and helping make the day as safe and slick as a well-greased otter in Fort Knox.  It’s not a dirty job, but someone’s got to do it, and if you’re interested, by all means get in touch at hello AT pedalonparliament DOT org

PoP needs YOU! (yes, including you at the back)