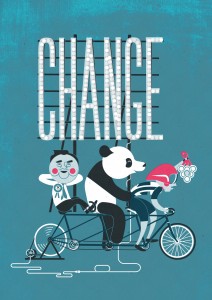 Pedal on Parliament has joined with the Stop Climate Chaos coalition to call upon the Scottish government to address carbon dioxide emissions from transport as a matter of priority. In an open letter Pedal on Parliament joins with Friends of the Earth Scotland, Spokes, Sustrans Scotland, Transform Scotland and the WWF Scotland to ask Minister Keith Brown to take a wider range of measures to make the changes needed to reach Scotland’s target to reduce emissions by 80% by 2050.

It is clear that in the long term, emissions cannot be reduced without a significant uplift in the numbers of people switching from their cars to bikes for shorter journeys. We all know why they don’t – because the conditions out there on the roads do nothing to encourage all but the most determined to ride. It will take more than a few posters and some training to get our kids – and their parents – riding regularly and safely to work, to school, to play. Our eight-point manifesto offers a clear blue print to achieve the conditions we really need to bring about a cycle-friendly Scotland. We hope that the combined voices of these organisations – not to mention the thousands of cyclists who joined us last April – will persuade the minister to make these changes and more before it’s too late.

If you agree, we hope you’ll join us on Sunday 19th May when we pedal on Parliament again.