As you may have seen online, the Scottish Government is consulting on its draft National Transport Strategy – and time is running out to respond (responses need to be in by Wednesday 23rd October). You can find the strategy here – and also a link to a survey asking you what you think. 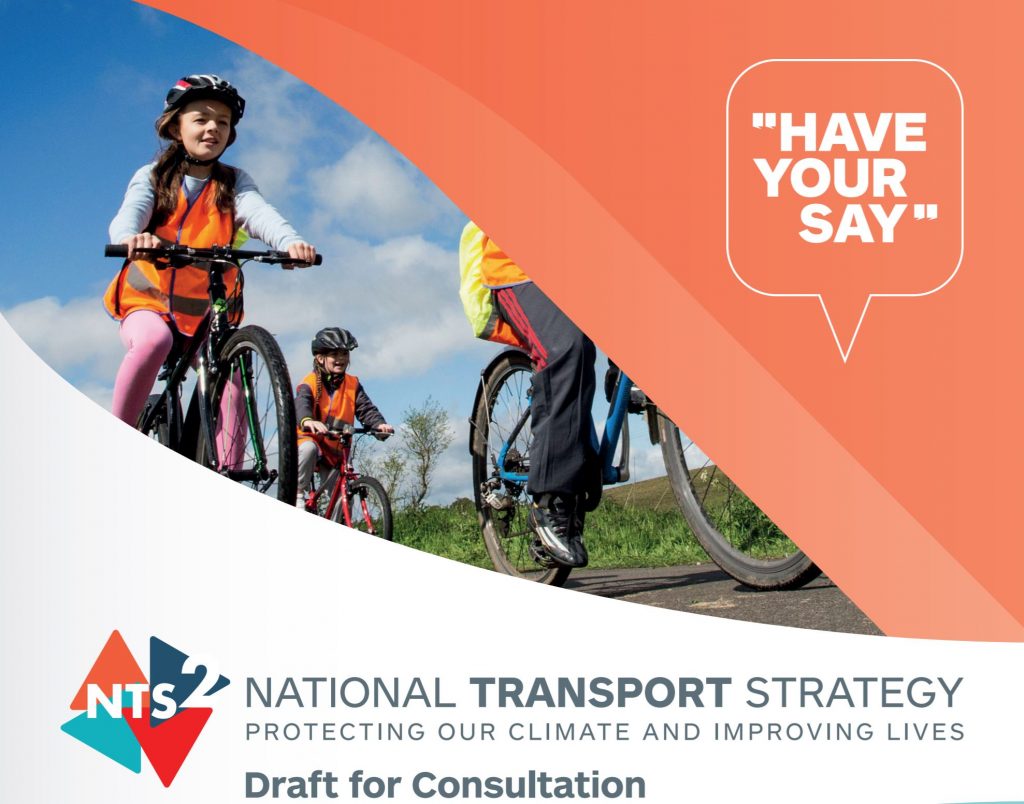 We’ve also been looking at it and in many ways, it’s a remarkable improvement on Scotland’s transport strategy up to now (which appeared to amount to building dual carriageways everywhere), and not just because it’s got children riding bikes on the cover. It starts with a vision which, in the way of these things, is hard to argue with:

“We will have a sustainable, inclusive and accessible transport system, helping deliver a healthier, fairer and more prosperous Scotland for communities, businesses and visitors” 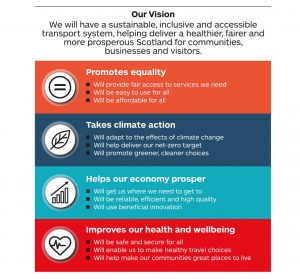 Underpinning these are four priorities: Promotes equality, Takes climate action, Helps our economy prosper, and Improves our health and wellbeing – most of which sound pretty promising from an active travel perspective. Under ‘Taking climate action’ for instance, it includes reinforcing the sustainable travel hierarchy, so that walking, cycling and public transport take precedence over private car use, while under ‘improving health and wellbeing’ there is mention of networks to encourage walking and cycling, and active modes being the preferred method of travel. It also explicitly states that “we will not be building infrastructure to support forecast demand – we will reduce the need to travel by unsustainable modes”, thereby abandoning the ‘predict and provide’ model that has driven excessive road building and induced demand in the past.

It also has an assessment of the current challenges which ticks a lot of boxes. It identifies issues such as children in poorer areas being more likely to be injured in traffic than those in richer areas – and the additional transport needs many women have, due to their greater caring responsibilities and on average more complex journeys. There is recognition of the potential for walking and cycling tourism, the role of bike couriers for last-mile deliveries, and the need to maintain as well as build cycling infrastructure.

Single occupancy car trips have been rising since the last transport strategy was published – but this strategy explicitly states “Not taking steps to effectively manage demand for car use is no longer an option. We need to consider alternatives that encourage single-occupancy drivers to shift, whenever possible, from making their journeys by car.” This shows how significant a change the strategy, if successful, would be for Scotland – and also what a mountain we have to climb.

Reading through the first two-thirds of the draft strategy, in short, it feels as if there’s a real sea change coming in how the Scottish government approaches to transport. But how will that sea change be brought about? Here’s where the strategy starts to feel a bit less convincing. We’ve had encouraging sounding policy documents before – and attractive visions (such as the famous vision of 10% of journeys by bike by 2020) but if they aren’t backed up by strong policies, reaching right down to the local level, and sustained investment, then they will come to nothing.

Unfortunately, when it comes to the list of policies and ‘enablers’ (mechanisms for delivering the policies, apparently), it’s hard to see where this change will come from. The 14 listed policies aren’t explicitly mapped onto the four priorities and they remain at the level of single sentences, rather than worked out policies or plans. For instance, where we might have expected something concrete on active travel, like bringing the National Cycle Network up to standard, instead we have enablers like ‘Promote and facilitate active travel choices across mainland Scotland and islands’ and ‘Integrate active travel options with public transport services’ – both laudable aspirations, but neither of them sounding like the sort of drivers that will change what is actually done on the ground, especially at the national level.

The final chapter does include some more concrete steps, which are more encouraging. Apparently, the strategy will be used to develop the options in the upcoming Strategic Transport Projects Review (STPR2) and the sustainable transport hierarchy will be embedded into decision making, updating the transport project appraisal guidance, which should hopefully slow down the pace of new road building and tilt the balance towards more sustainable projects. But, ominously, the strategy goes on to say “others will be challenged to adopt a similar approach”. It’s not clear who these ‘others’ will be – but if it’s local authorities and regional transport partnerships, then this seems desperately weak. 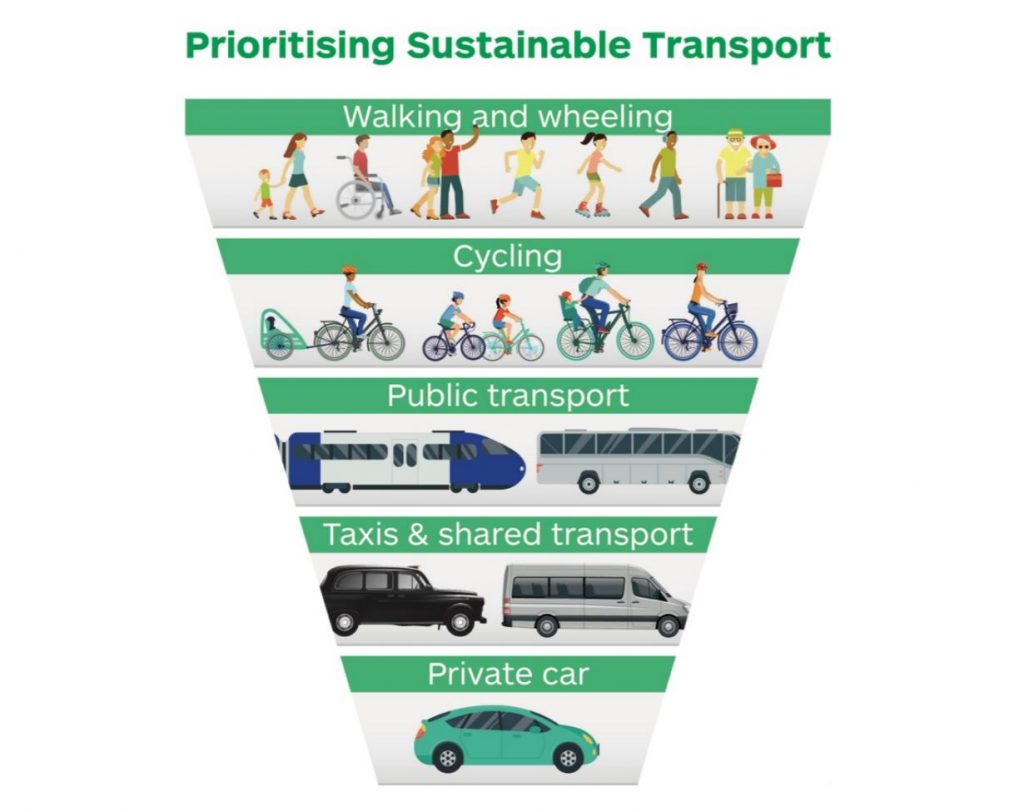 Transport policy in Scotland is complex, as the strategy itself makes clear. As well as the national government, there are also regional transport partnerships, local authorities, NGOs and private commercial providers. Many of the changes that affect walking and cycling positively or negatively are as much the responsibility of local councils as the Scottish Government and we can’t see how this shopping list of aims and aspirations will have a real effect on them, especially on those councils that are still largely in thrall to private motoring (for instance, Aberdeen City Council has recently announced it is reviving a 15-year-old plan to add traffic capacity to the city centre by widening roads, despite its recently completed bypass). There are plans in this strategy to review the governance of transport policy – but we can’t wait for the outcome of that – we need to start making changes now. The strategy needs to include concrete mechanisms to ensure that local and regional transport strategies also conform to the laudable vision and priorities this strategy outlines.

All of this is quite hard to fit into the standard consultation response format! However, we do encourage everyone to get their responses into the draft strategy if they can – and also to engage as much as possible with the STPR2 process and other policy reviews as they happen, nationally and locally. Cycling UK has published a guide for their members, which may help you work your way through the consultation survey. You can also email your feedback directly if you find that an easier format to use – just email NTS2@transport.gov.scot.