Lynne McNicoll founded the Andrew Cyclist charity along with her husband Ian after her stepson, Andrew was killed on his bike in Edinburgh. As well as being a tireless fundraiser for all sorts of causes she has been a supporter of Pedal on Parliament from the outset and she and Ian led out the ride last year. Here she is in her own words: 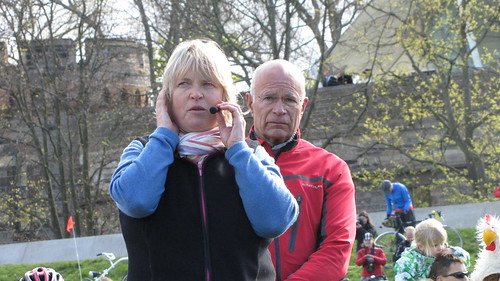 I was asked a few months ago to write this guest blog post but it has taken me till now to actually do it. I wasn’t sure why I was putting it off. This week I realised it’s partly because the last year has been so much more difficult than we ever imagined it would be. Once the shock of Andrew’s death wore off and the reality sank in so did the real grief. In the beginning there is so much to be done on a practical basis too. We have both kept busy over the past year but there comes a point when you have to deal with your loss.

And then there was the fact that I feel like I have failed Andrew. I said I was going to get back on my bike. I said so very publicly at last year’s Pedal on Parliament. I tried. I cycled to meetings instead of taking the car. And hated every second on the bike because I was so scared.

The moment I came off the bike (at the end of my road after hitting an unnoticed pothole and fortunately there was no traffic around) and lay on the ground was it. Bike went back into garage and is firmly locked up there.

Do I even want to cycle now? You bet I do.

We turned a corner on New Year’s Day feeling that with the New Year so our strength returned. Our determination to work with others to make cycling safer for all abilities returned and that includes me!

I would love to see segregated cycle ways – that way everyone could be happy – I would be a very keen cyclist on a path dedicated to cyclists. Drivers would be happier, pedestrians too. As a walker I often walk into town via the canal paths – they are fine to walk or cycle when quiet but it’s often a narrow path and not much fun at busier times.

But what can be done now? Well, as we work towards getting segregated cycleways we should all be more aware and show mutual respect to each other as cyclists/walkers/drivers on roads and shared paths. I believe I was always cautious when passing a cyclist on the road but since Andrew’s death last January I have become more aware of them – looking ahead of them to see the obstacles that might mean they have to take action. I suppose trying to put yourself in the other person’s shoes is a good idea too – whether you are the driver, cyclist or pedestrian.

Other improvements we would like to see include a reduction in the speed limit in residential areas and also a review of vehicle parking particularly near traffic islands.

I have admiration for many cyclists who cycle our city streets and despair for quite a few. Admiration for those who cycle along busy roads and at busy times. I am much more aware of potholes. I walk more these days (as I am training for a trek up Kilimanjaro in October) and still drive a bit too. The roads are in a terrible state – the number of potholes is truly ridiculous. I despair of the cyclists who go out in these winter days with totally inadequate clothing. How do you expect drivers to notice you when you are dressed from head to foot in black? The number of cyclists without any lights is genuinely baffling to me – don’t you care about your own safety?

Ever the optimist I will go out on my bike again (I think I always knew that I would or else I would have sold the bike last year!) but not till the weather is a bit better. I will be wearing my very pink jacket and helmet and make sure my lights are visible front and rear. Ian and I are toying with some ideas for better lighting/jackets – who knows, perhaps we will turn into designers yet!

We are both very grateful for all the support shown to us during the past year. The anniversary of Andrew’s death was a hard day to cope with but with support from family and friends (and a huge amount from the twitter community) we got through the day and now look forward to 2013 – a year where we hope to see real change in cycling safety.

We look forward to seeing many of you at this year’s Pedal on Parliament – 3000 was a tremendous number of cyclists at last year’s – help us increase that number this year!