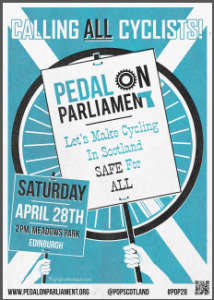 When we launched Pedal on Parliament we had an idea that it was going to be popular among cyclists – but we never dreamt that, six weeks later, there would be not one but two parliamentary motions lodged about it. First, Alison Johnstone of the Greens lodged motion S4M-02641 supporting Pedal on Parliament’s manifesto and encouraging everyone to join us – as well as proposing 10% of the transport budget to be spent on active travel (which includes cycling as well as walking – our manifesto is calling for something closer to 5% nationally and locally, or £25 per head per year). No sooner had the digital ink virtually dried on that, when Marco Biagi of the SNP lodged motion S4M-02657 welcoming (but not supporting) our manifesto, which it called ‘practical and helpful’ and supporting our event, and calling on all levels of government, national and local to ensure the needs and safety of cyclists are given due consideration – but without any concrete funding commitments.

We urge you to look at both motions and call your MSPs’ attention to them, letting them know which of them you’d like to see them support – and let us know what response, if any, you get.

However, although we’re pedalling on Parliament, it’s not just our national politicians we should be holding to account. Marco Biagi’s motion mentions specifically the Transform Scotland report on Civilising the Streets, which looks at cities across Europe and how they’ve managed to promote active travel through sustained investment at a local level. While national government is vital – setting priorities and providing the bulk of the funding – don’t forget that much of the day to day investment in cycling infrastructure is in the hands of local politicians. Remember that on May 3rd, elections are being held in every single local authority in Scotland. Now is the time to let your council candidates know that you think cycling is important and ask them what they plan to do to make your village, town or city cycling friendly. You might be surprised what getting a few really supportive local politicians in place can achieve.

And that’s not all that caught our eye in the Transform Scotland report. Reporting on how Copenhagen got its cycle paths, it writes:

In the 1980s, the Danish Cyclist Federation found itself led by a group of young idealistic cyclists. In contrast to the older members who had previously run the organisation, these new leaders often didn’t have a car and they had a strong desire to see improvements in conditions for cyclists. They successfully tapped into the large section of the public who wanted to continue cycling but saw conditions deteriorating. This led to annual, colourful, demonstrations in front of the Danish parliament and Copenhagen town hall. Tens of thousands of people participated in the demonstrations, and the level of support both surprised and impressed the politicians. This led to increased investment and focus on cycling facilities and cycle tracks being built on more ‘difficult’ roads (for instance, where space was at a premium). The new cycling priorities were initially not popular with the planners, and there was some resistance, but the politicians pushed for more cycling investment and over time this led to cycling becoming ‘mainstream’ within transport planning.

“colourful demonstrations in front of the Danish Parliament“… Now, we ask you, does that sound at all familiar? Above all, we need you to Pedal on Parliament

Going Through the Motions