It’s been an interesting two days for cycling in Scotland – what with the debate on Strict Liability in the Parliament and the ‘See Double‘ demonstration for better funding for active travel. Today’s demo saw hundreds of people give up their lunchtime to ask for change, while the debate saw MSP after MSP stand up to deplore the accident rate among cyclists in Scotland – while noting the many benefits that more cycling and active travel brings. While they did not agree on whether strict liability would be the answer, they did bring up many other solutions dear to our heart from well-designed cycle tracks to more investment on active travel. Even the Transport Minister, Keith Brown, recognised that better infrastructure and higher levels of investment were the way forward – something that has changed radically from two years ago, when this government was proposing to cut spending on active travel.

So, do they get it? Can we all go home? Is there any need really to give up a lunchtime to stand around outside St. Andrew’s House in the cold, or sacrifice a Sunday afternoon to pedal on Parliament?

Unfortunately, yes. You might argue that we would say that, but sadly it’s true. The Minister’s own reply revealed just how much they still don’t get what it would take to make Scotland a cycle-friendly nation. Set aside things like budgets and infrastructure design and the finer points of civil law and listen to the real experiences of real cyclists out there on the road – and how little is being done to change things for them. Take Kezia Dugdale, for instance, who took up cycling after attending POP, but who still struggles to brave Edinburgh’s roads. As she said in her speech:

“I cycle only to two places. One of those is Portobello beach, which I can cycle to from my house entirely off road, thanks to the Restalrig railway path and all the public investment that has gone into off-road cycling paths in Edinburgh. The other is my gym, for which I need to cross only one main road, which I can do by pushing the bike over the street. There is no way I would cycle to work, because that would involve cycling up Easter Road in the morning at peak times; it is just too dangerous. Until I can be persuaded that cycling is safe, or we invest in the infrastructure such that cycling becomes obviously safe for everyone, I do not think that we will meet that challenge.”

Scotland needs more Kezias – it needs more people to take to two wheels who are not ‘cyclists’ – who do not relish tangling with traffic, who are not super fit and super fast and super confident. Whenever you talk to someone who doesn’t ride a bike much about cycling you will hear a variation on those words – that they have a bike, they love to ride it but only on the canal, or the cycle track or getting off to cross a busy road. That they’d love to ride to the shops but that would mean tackling a scary roundabout, and they’d love to ride with their kids to school but they don’t dare let them deal with the traffic at the school gates. The fact that they cycle at all makes them the real heroes of Scottish cycling, and they are exactly the people we need to be getting on their bikes not just to go to the two or three places that they can manage but everywhere. They are the people who PoP is really for, them and their children and their parents and grandparents

So how did the minister reply? What is the government doing to encourage Kezia and the thousands like her? Here are his words:

“Kezia Dugdale … mentioned Easter Road. One of the officials from Transport Scotland who is sitting at the back of the chamber regularly cycles up and down Easter Road and feels that it is a safe road to cycle. Such things are subjective and depend on people’s experiences and perceptions of the environment around them, but other people feel that the road is safe in the circumstances.”

So that’s all right then. 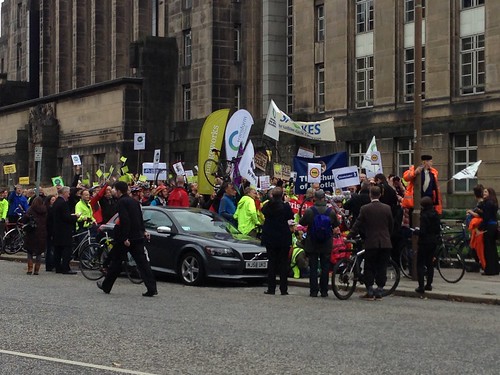 About 200 demonstrators gather outside St Andrew’s House – image by Chris Hill on Flickr.

Do they get it?