We might be called Pedal on Parliament – but that doesn’t mean you have to come on a bike! Rhian Davies will be leading the marchers at POP this year. In this guest post she explains why she’ll be on two feet rather than two wheels …

This is the third year I will be attending Pedal on Parliament (POP). Previously I cycled the route from The Meadows to Holyrood. It’s a liberating experience having traffic free roads, being able to freewheel along The Royal Mile, waving to people along the way. As a resident of South West Scotland I’ve either borrowed a bike in Edinburgh or had the use of a Brompton to get myself by bus and train to Edinburgh.

This year however, these options aren’t available. The choices are: take my bike by train from my local station on a three hour journey with at least one change. Not too bad but it is costly and I never find train travel with a bike straightforward. I could cycle to Lockerbie for the faster, cheaper, easier train route to Edinburgh. It’s 12 miles to Lockerbie by road, but if I want to avoid the 60mph narrow, winding, busy road used by haulage trucks, which I do, the alternative is a 21 mile route over a significant hill. Now I do love cycling but a 42 mile round trip for me is not convenient when all I’m wanting is to get to the station.

So this year, I’ve decided to walk at POP. And it’s made me think. Cycling is not given the attention it needs, but walking seems to have dropped off the radar all together.

Walking is the absolute cheapest, easiest form of transport known to us bipeds. We’ve been perfecting it for ages, but somehow have managed to design it out of the majority of modern day lives. It is the most basic form of travel, one of the things we have evolved to do, and yet it barely seems to be considered as a viable travel option.

Where there should be wide pavements for two people to easily wander and chat side by side, there are footways squeezed shut by widening roads and parked cars. Street clutter is a hindrance at best and an impassable barrier at worst. Many crossings are ill positioned, priority given to car parking or maximising traffic speed, rather than making the pedestrian’s route the easiest. Then there is the gamble of whether at a signalised crossing it’s quicker to wait for a gap in the traffic or press the button. And when you do get the light you’re rushed across with a four second green man, not long enough for many.

It’s great now that GPs can prescribe exercise to patients but wouldn’t it be better if instead of prescribing diabetic patients a gym membership to use a treadmill, we had a culture of walking, which would prevent many of these illnesses?

Let’s make room for people on our streets, whether they are rural or urban areas. And let’s ensure these streets are actually usable for the most vulnerable in our society. That way we can create an environment suitable for everyone. So please, join me, and the many others who are walking at this year’s POP. 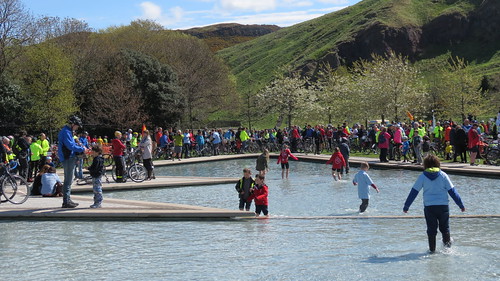 Why I’ll be a Pedestrian on Parliament