For anyone who’s not a politician, the Holyrood elections next May probably seem like a long way off. But the fact is, the manifestos that the parties will campaign on are already being written – and this weekend and the weeks that follow will see the Scottish parties gathering for their autumn conferences, where policies will be discussed and voted on, and the ‘battle lines’ drawn up for 2016.

This matters because the Scottish Government has far more power over cycling in Scotland than the UK one – that’s why we started Pedal on Parliament in the first place. 2016 will be the first Holyrood election since POP was formed, and we hope that next April’s POP will reflect the importance of the coming election. We’re not, and never will be, a party political campaign – we want to see cycling on every politician’s agenda – and the more people who turn out to tell our politicians that cycling matters to them, the more likely that will be. And we are not alone in this. Campaigns and organisations across Scotland have been coming together to agree a joint platform for active travel, so that we can speak to all the parties with a common voice. Now there is an umbrella campaign – supported by a remarkable cross-section of active travel groups – called We Walk, We Cycle, We Vote, that will be making sure that these concerns don’t get brushed aside, in favour of the ‘bigger’ issues (although as we argue in our manifesto cycling is part of the solution for many of these issues, from health, to inequality, to the economy). 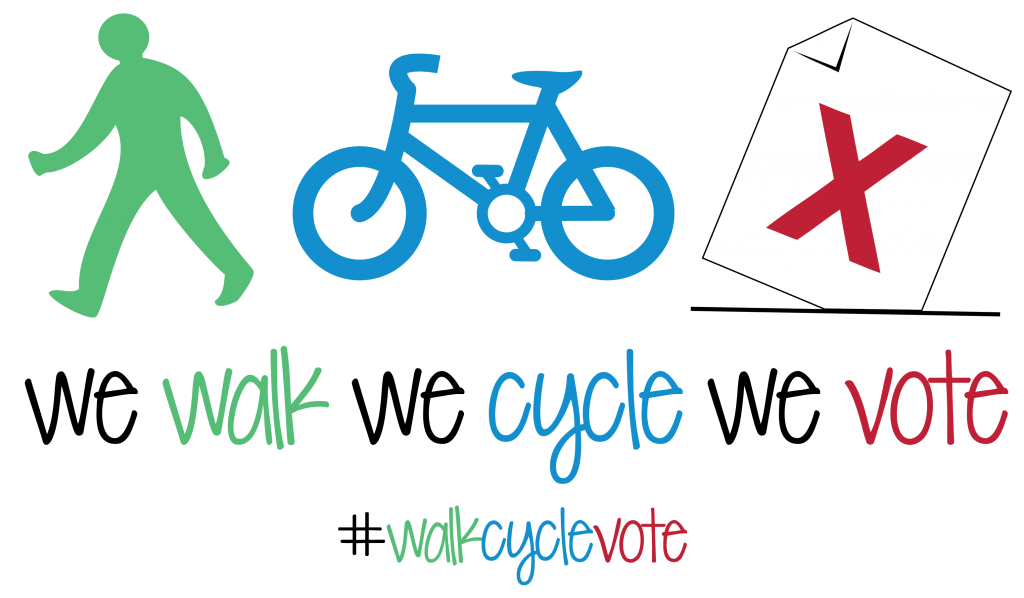 Joint platforms like this can end up being somewhat watered down, motherhood and apple pie. But as it happens, the three points that came up as top of the agenda for all cycling organisations, big and small, radical or not, turned out to be remarkably clear and ambitious:

POP will be fully supporting of We Walk, We Cycle, We Vote – which is being partly led by POP’s own Sally Hinchcliffe, alongside Suzanne Forup from the CTC (who are also funding the campaign). We’re delighted to see that many of the points on our own manifesto have been taken up by the mainstream. We will continue to campaign for our own manifesto, which is more detailed but this means we won’t be undercut by less ambitious policies, especially over funding.

We Walk, We Cycle, We Vote will be kicking off with a cycle ride at the Green Party conference in Glasgow tomorrow, followed by one at the SNP conference in Aberdeen on the 17th, with events at the LibDem and Labour party conferences on the weekends after that. If you can get along to any of these events then please do, and watch this space to find out how you can help support both us and our new ‘umbrella’ as the political campaigns roll into action. Together we’ll have a stronger voice for a cycle-friendly Scotland

Umbrellas at the ready…