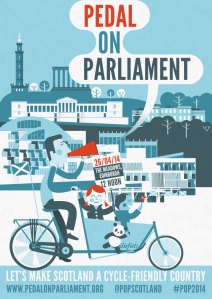 Cycle-Pathic: Cyclists gearing up for Pedal on Parliament 2015

STV Thousands turn out for fourth Pedal on Parliament

Herald Checklist: 10 things to do this weekend

Scotsman/Scotland on Sunday Cyclists campaign for safer roads at parliament

The Guardian Why we pedalled on the Scottish parliament

The Herald Case for cycling

The Scotsman Cyclists use pedal power to make point

STV Edinburgh Scottish Government on cycling and Pedal on Parliament

Edinburgh Reporter Pedal on Parliament 2 live coverage as it happens.

Edinburgh Reporter Road closures for Pedal on Parliament 19 May

The Herald Police are appealing for witnesses to another cycling fatality on Scotland’s roads as up to 3000 people prepare to take to two wheels to demonstrate at Holyrood for safer conditions for those who travel by bicycle.

The Herald Families of cyclists killed on roads join campaign

The Scotsman Cycle of life

The Herald Cyclists are a not a minority of cranks. We represent everyone

The Courier Saddle up: cyclists urged to Pedal on Parliament

The Scotsman Pedal on Parliament bid to improve cycle safety

Coverage of Graeme Obree joining Pedal on Parliament from road.cc, The Herald, the Edinburgh Reporter and Bike Biz, while The Scotsman includes POP as part of the Scottish ‘cycling season’.

The Holyrood Magazine on Pedal on Parliament, CAPS and declining car travel: On Your Bike

The Edinburgh Reporter asks Sir Chris Hoy on his retirement if he’ll be coming to POP “If I am around in May I would love to. It is a great campaign which I have supported in the past with messages of support.” Sir Chris Hoy announces his retirement

The Scotsman reported on the launch Cyclists take message to Holyrood

Road.cc also covered the launch, with a couple of videos from the last POP: Scottish Cyclists to repeat Pedal on Parliament ride

The Herald Worrying rise in cyclists injured on Scotland’s roads

The Southern Reporter Campaigners pile on the pressure to ensure golden legacy for cycling in Borders.

Saturday 29th September 2012 Dave Brennan is interview on Radio Scotland’s Out of Doors show about the evidence on the draft budget he gave at the Scottish Parliament’s Transport and Infrastructure Committee (link to follow).

The Edinburgh Reporter reported Sally’s trip to London as Pedal on Parliament campaigner shortlisted for award.

STV Local on why Edinburgh should take cycling infrastructure seriously and our Pedal on Postbox campaign.

The Herald announces that the City of Edinburgh Council are going to follow up our suggestion to create a new cycle network to be named after Sir Chris Hoy.

Edinburgh Evening News follows up on our proposal for cycle infrastructure on Leith Walk by asking Which is the right path to get people pedalling?

Unchained Mag. the co-founder and editor writes about her experience of the Pedal on Parliament ride.

The Herald columnist Alan Taylor mentions Pedal on Parliament: Quick, get on your bike and save yourself

STV Local outdoes itself with a video and article: How thousands of cyclists rode on Holyrood to reclaim the roads, a map of crash locations and a gallery of photos from the day.

The Edinburgh Reporter: 3000 cycle for Pedal on Parliament – brief summary but includes some of the tweets, pictures and videos from the day

BBC Scotland: still sticking with their estimate (lower than the police’s) of 2000: Cyclists ride on capital calling for safer roads

STV Local: minister defending budget as people mass at the meadow: Cyclists in mass rally to campaign for more investment and safer roads

The Times: covering both the London Big Ride and Pedal on Parliament: 10,000 pedal for action in biggest bike protest

Herald reporting on the ride: Hoy and Obree back bid for safer cycling

The Scotsman talked to Kim, Sara and Dave Brennan: Pedal on Parliament: Introducing the campaign for safer cycling

BBC Radio Scotland phone in asks if cyclists are taking their lives into their hands on Scotland’s roads: Call Kaye (Kirsty Wark sits in)

Fife Today Kirkcaldy cyclist heads to the capital for biking campaign, story about one of the feeder rides from Fife to Pedal on Parliament.

The Herald a good article from Susan Swarbrick on how female cyclist are being driven off the roads (unusually, the letters are worth a read as well)

STV Local report from the Scottish Bike Show: Hundreds more sign up to Pedal on Parliament

The Times Pedalling in protest – thousands of cyclists to take to streets on April 28th: about the rides in Edinburgh, London and Rome.

STV News covered the Parliamentary debate, including mentions of Pedal on Parliament’s ride on the 28th April: MSP argues reduces 20mph speed limit should be standard on residential streets.

The Bike Show, Resonance FM: “Scottish cyclists will take to the streets of Edinburgh to call for the Scottish government to put more investment in cycling infrastructure and cycle safety” – and an interview with Sally Hinchcliffe, now available as a podcast.

Dumfries & Galloway Standard: “a nationwide campaign to make Scotland’s roads safer” – picking up on the local connection. Dumfries Cyclist looks ahead to Pedal on Parliament

Reporting Scotland “Lower speed limits, better infrastructure, we are set to hear a lot more about cycle safety as we count down to a protest next month at Holyrood, dubbed Pedal on Parliament” Reporting Scotland covered the Cycling Summit, and gave us a nice plug at the end to boot.

The Guardian Bike Blog reports on both Pedal on Parliament and the cycling ‘summit’: Safe Cycling Campaign pedals to Scottish Parliament

The European Cyclists’ Federation reports on our campaign and puts it in a European context: Pedal on Parliament: Scotland’s push for safer cycling

Edinburgh Evening News: “Yes cyclists need more training before they should be able to cycle on roads – a proficiency test at primary school is no longer enough – but drivers too need to accept that cyclists have rights on the roads” Supportive editorial mentioning Pedal on Parliament by Gina Davidson

.citycycling supports us … in their own unique fashion

Road.cc – quoting our manifesto in full: “To be a cycling nation again“.