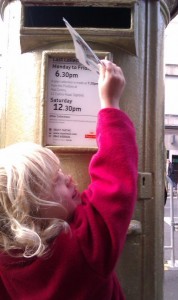 We’ve posted a fair bit about Mark Ruskell’s bill to make 20mph the speed limit in built up areas. Unfortunately, despite overwhelming public support and a mass of evidence in favour of the bill, it appears the Scottish Government is not yet convinced, preferring to leave the matters in the hands of local authorities. We think this would be a mistake and that the government is passing up a golden opportunity to make Scotland’s streets safer for everyone. That is why we’ve joined forces with 25 organisations to draft this joint letter to Nicola Sturgeon urging her to put her government’s support behind this bill. If you agree, please let your MSPs know.

An open letter to First Minister of Scotland, Nicola Sturgeon

We are writing to you directly to reiterate our support for the Safer Streets Bill. The undersigned organisations working in active travel, health, child advocacy, poverty and environment fully support a nationwide move to lower the default speed limit on restricted roads from 30 to 20mph, and believe that the bill is the best way for Scotland to achieve this. We hope that the Scottish Government will seize the opportunity and support this bill.

Lower speed limits, and particularly 20mph in urban areas, save lives. They are proven to reduce the number, and severity, of injuries on the road. We understand reservations about a ‘blanket’ approach to implementation, but there are significant benefits to a national approach led by the Scottish Government:

1. It is more equitable. When schemes are introduced piecemeal, there is a danger that the areas with the loudest voices – and where implementation is easiest – get prioritised. Road traffic casualties disproportionately occur in the poorest areas and we believe that leaving 20mph schemes up to local decision making risks widening these inequalities. That does not fit with Scotland’s strong commitment to fairness.

2. It is more cost effective. Leaving it up to local authorities to devise, implement and individually promote each 20mph scheme will inevitably cost a great deal more than if the national government does so centrally. Evidence given to the Rural Economy and Connectivity Committee suggests that the Safer Streets Bill will be substantially  cheaper for local authorities to implement than the present system.

3. It offers the greatest scope to reduce casualties. The recent Atkins report for the UK Department for Transport found that it was the scheme with ‘blanket’ provision – in Brighton – that saw the most significant casualty reductions. Current guidelines to only implement 20mph speed limits on roads where speeds are already quite low are too timid. Changing the national speed limit ensures the inclusion of more roads where traffic speeds are higher and will lead to the greatest average reduction in speeds.

A Scotland-wide reduction in speed limits will save lives every year, not only through reduced casualties but as more people choose active forms of travel and the air quality in our communities improves. We cannot wait for individual local authorities to implement this in a few limited areas, as and when they have the resources. We cannot wait for more studies.

We need Scotland to lead, as it did banning smoking in public places and reducing the alcohol limit for drinking and driving. The Safer Streets Bill offers the best chance of safer, fairer roads. The time to act is now.

You can see the full text of the press release here.

20mph Bill: An open letter to the First Minister