This week saw the launch of British Cycling’s Choose Cycling report. A lot of it we’d totally agree with – many of its 10 recommendations match our own manifesto – but there is one headline figure that we do take issue with: that the UK government should spend a minimum of £10 per head on cycling infrastructure (rather than the current £1-2 per head being spent now).

We’ve been consistent here at PoP in asking for a higher sum from the start – at least 5% of the transport budget, within an overall share of 10% for all active travel, which would amount to about £20-£25 per head on cycling alone (the lion’s share of which should be on infrastructure and other changes to the roads, rather than softer measures). 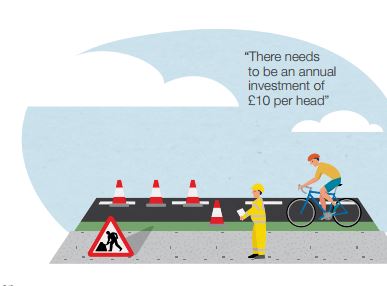 We didn’t pull our own sum out of thin air. As we argue in our manifesto, there are sound reasons for choosing it. First, it’s comparable to the amount spent in the Netherlands (about €30 per head from all sources), the country with the highest rate of cycling in the developed world. It seems obvious to us that if we’re going to encourage the sort of increases in cycling that will make a real difference to Scotland’s health, wealth and happiness, then we should be following the example of the best.

Second, we didn’t arrive at the figure on our own. All of the organisations involved in active travel in Scotland (from Spokes to Sustrans to Ramblers Scotland to Transform Scotland) agreed with the recommendation made in 2010 by the Directors of Public Health that 10% of the transport budget should go on active travel. It also seems more than fair that if the government truly has a vision of 10% of journeys to be by bike by 2020, that we should get at least 5% of the budget – for after all, when it comes to our cycle network we are more than 40 years behind the best, and losing ground all the time.

Nor is this unaffordable. The government is spending eye-watering sums of money on dualling roads – despite the fact that the return on investment for road spending is miniscule. Building more roads eventually just creates more traffic, increasing congestion and pollution and worsening the health of those who use them and those who live beside them. Whereas building more cycle tracks increases cycling – reducing congestion, reducing pollution, and delivering a massive return for the health of the area. In Glasgow, for instance, the economic benefit of cycle trips into the city centre was recently calculated at £4m a year – and that was without even including the benefit from reduced levels of illness.

We appreciate that this spending cannot suddenly come all at once. Attempting to pump Dutch levels of spending in overnight without also improving the design guidelines and developing the skills needed across the country would likely result in waste as poor-quality schemes are rushed out that don’t meet the needs of ‘8-80’ cycling. However a commitment to a steady increase, year on year, until the target is met would allow local authorities, Sustrans, Transport Scotland and the Scottish Government to invest in their staff and build up the know how and experience to deliver a world-class cycle network.

It could be argued that this is what both British Cycling and the more detailed Get Britain Cycling report is also asking for: after all, in the text of the document it is clear the £10 per head figure is a minimum ‘increasing to £20’ eventually. However, if the target is really £20, why muddy the waters with the lower figure at all? When negotiating with governments, such nuances easily get lost. The headline figure becomes the only one that counts. Pretty soon we’re being played off one against the other: we’re asking for £20-25, British Cycling say they only need £10 – which one do you think the government’s going to listen to in that situation? We all need to unite around a common clear message about what it is we really want.

Obviously, spending £10 a head would be an improvement on the current situation, especially if the money were to be committed over the long term and not being announced at short notice whenever cash could be found (or 4000 people show up at the doors of parliament). But the less we spend each year, the longer it will take for cycling to become truly mainstream. Cycle routes are only as good as their worst link – so if people are to use their bikes to get about they need a network in their area that is extensive and densely connected. The less money there is, the more likely it is that only a few roads and junctions can be sorted, leaving far too many Scots still dependent on their cars. Or else, councils will be tempted to cut corners and go for cheaper measures such as shared-use pavements or paint on the road that impinge upon pedestrians or else only cater to existing cyclists, rather than creating new ones.

But more to the point – why would we ask for something that’s merely an improvement when most people agree it’s still not enough? Why should we settle for just being a bit better when we could aspire to be the best? In this year of all years, why shouldn’t we campaign for the sort of Scotland we want to be, rather than the country we think realistically we should settle for? Together we can make Scotland a truly, world-beating, cycle-friendly country.

Why £10 per head is not enough