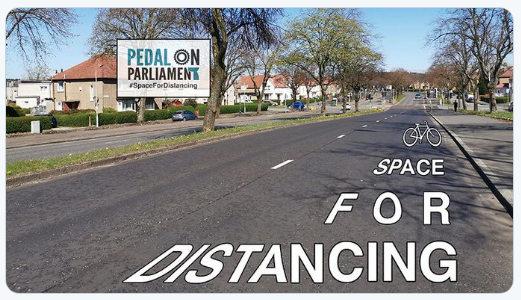 It’s now been over three weeks since the transport minister announced an extra £20m for the Spaces for People funding – so what’s happening on the ground? Which councils have successfully applied for money and to do what?

Sustrans have now listed all of the funding awarded so far but with no details on the individual proposals. We’ve trawled through the websites of every local authority in Scotland to see what we can find out. (If you want to get a flavour of what it’s like at the coalface of cycle campaigning you can follow this twitter thread for a blow-by-blow and council-by-council account).

Reviewing the various LAs #SpacesForPeople plans and it's interesting to see the different approaches. So far been impressed by the @EastRenCouncil consultation and phased plan – looks like a good mix of immediate action & more considered consultation https://t.co/kxzHeWoNGK

We’ve listed all the councils below, and what we could find out about each one’s plans. From what we could find online, 9 councils have done nothing at all, 7 have been awarded some money but haven’t announced any details about their bid or their plans and 4 have just started consulting on possible measures. NHS Highland helped Highland Council with their bid and a few other public sector bodies have submitted bids of their own with TACTRAN also awarded some money so far, although we haven’t got the details of those yet. In total, almost £16.5m has already been allocated. If the Minister hadn’t increased the size of the fund, Aberdeen, Edinburgh and Glasgow city councils alone would have hoovered up all of the initial £10m – the way things are going, even the £30m isn’t going to be anywhere near enough. The appetite for change is clearly out there among local authorities and the wider public, surprising everyone, including the Scottish Government.

When it comes to the sorts of approaches being planned they’re also a very mixed bag. Some councils are concentrating mainly on pedestrians and the need to queue outside shops, while others have explicit plans for arterial cycle routes to mitigate for loss of public transport capacity, which could otherwise cause gridlock in many towns and cities. Within urban areas, measures include temporary 20mph zones, parking restrictions, pavement widening, automatic green man cycles at crossings and temporary crossings, bike lanes (some segregated, some just paint), traffic filters and low traffic neighbourhoods, street closures around schools, and one-way systems and signs for pedestrians and at bus stops. But it’s not all been town and city centres – some councils are looking at rural roads, largely through introducing 40mph limits and clearing and widening footpaths.

Like everyone, we’re impatient to see measures appearing on the ground, but also conscious that things are moving very much faster than normal for council schemes. The details below show that some councils have been much more prepared than others, and that they take a very different approach to publicising and consulting over their plans.

Whatever your council is doing, you need to let them know that you want to see proper #SpaceForDistancing. If they are consulting, then please take the time to respond, add your own suggestions, and support others that make sense. If they aren’t, then they will still be monitoring social media so it’s worth tagging them into tweets and posts with suggestions – or positively supporting plans they’ve announced. Councillors pay attention to emails from constituents, so get in touch with yours (and you can also find a list of key contacts in each council here). And if all else fails, some groups have made their suggestions in more concrete form … and actually seen their guerrilla lanes made official.

AMAZING! Big shout out to staff @GlasgowCC for working with us to make this pop up bike lane into something the community love, are proud of, and are using! @AnnaLangside @AnnaLangside pic.twitter.com/eWyEuqDWQk

This is a massive opportunity to see things trialled that we might have had to campaign for years, or even decades for – don’t let this moment pass. Not all of the plans will be perfect, and none of them will give local cyclists everything they want or need – but there will be many people out there opposing even the most timid measures. So please support plans that will provide improvements (even if those are minimal, as long as they are fit for purpose), while also adding in the suggestions that would make them better. And you can also use this list to point to plans in other local authorities, to show your council what can be done. If your council isn’t doing anything, ask them why they’re missing out on this opportunity to invest – Sustrans will even provide support if they’re struggling with resources.

Writing emails and filling in consultation forms may not be as fun as pop-up protests or mass rides on Parliament but, in our still locked-down world, it’s the most effective thing that you can do right now.

Together we can make Scotland a (temporarily – but maybe, in time, permanently) cycle-friendly country.

Where does your council stand?

£1.76m in funding awarded. Plans include the pedestrianisation of shopping streets in city centres, some footway widening. Consultation on further measures via a Commonplace site.

Consultation process on possible measures started on the 18th June.

£95k awarded, but no details available or consultation announced.

Have bid for £1.4m. Ran a consultation exercise (now closed) that got almost 3000 contributions and over 750 detailed comments.
Updated! Temporary measures will be introduced in: Musselburgh, Tranent, Haddington, Prestonpans, Dunbar and North Berwick, details here. In rural locations additional cycle racks will be installed at countryside sites including coastal car parks and new 20mph speed limits will be introduced in all towns..

£5m awarded. Got off the ground quickly with initial temporary moves and its immediate measures include partial road closures, retiming signals to include an automatic green man and temporary segregated cycle lanes (e.g. Crewe Road South). Next phase includes Waverley Bridge and East Princes Street, with plans for footway widening and cycle segregation in local town centres to be shared from June 15. Arterial routes are being considered for design and notification to be completed by 31st July, along with low-traffic neighbourhoods, safe routes to schools and more local town centres. There’s a Commonplace site for more suggestions

No information on any plans although according to reports the council have submitted a bid.

£2.42m awarded. The proposals are still being developed and will be shared more widely before being put in place. Proposals include extra pedestrian space, widened footpaths for access to public transport, pop-up cycle tracks and routes, speed reduction measures, behaviour change promotion to promote walking and cycling, adjustments to traffic signals, traffic priority and filtering systems. Short term travel infrastructure to be implemented by the end of July. More complex measures will be delivered in August and September. More information here

£3.5m awarded. As well as the already completed Clyde Street pop-up bike lane and Kelvin Way filtering, there are three work streams: city centre (pretty much every street in the very centre of the city), neighbourhood space (mostly pavement widening) and active travel routes (light segregated cycle lanes on eight roads). There is also a Commonplace site for further suggestions.

£750k awarded. Most of the cycling measures are in Inverness, including temporary cycle tracks using water-filled barriers, a new one-way system to make space for footpath widening and cycle lanes, temporary traffic lights and removal of barriers. Elsewhere there is a 20mph zone in Dingwall, and plans for wider pavements and parking suspensions in Aviemore, Fort William, Portree, Nairn and Wick. Very detailed consultation here.

£157k awarded. Their initial bid is to create 53km of cycle lanes for cyclists commuting into Edinburgh – just paint at the moment, combined with a lowering of speed limits to 40mph. They are inviting suggestions for a second bid – email SpacesforPeople@midlothian.gov.uk.
Update: A number of their proposals in the first bid did not receive funding although some have and will be going ahead. The second bid proposals now include a ban on vehicular traffic ban on three roads, the erection of cyclists dismount signs, a limited amount of path widening, and some signage outside schools, but sadly no re-allocation of road space outside schools with narrow footpaths to allow space for distancing.

Considering road closures to make space outside businesses. There is a consultation document that businesses can download and fill in but nothing aimed at the wider public

£100k awarded. No information on any plans

£567k awarded. Measures include filtering roads in Airdrie, Kilsyth and Motherwell. No announcements of further details or consultations.

£37k awarded, but no details available or consultations announced.

Local media reports that the council have applied, but no information on any plans on their website

£250k awarded but no details on their website. According to this tweet, it is to evaluate the work done by its constituent councils, Angus, Dundee,  Perth and Kinross, and Stirling.

Launched a Commonplace site for suggestions.

£600k awarded. Their bid covers localised footway widening and parking suspensions, introduction of walking and cycle friendly rural roads with speed limits reduced to 40mph, temporary advisory cycle lanes on a few roads in Broxburn, Linlithgow, Livingston and Blackridge. 20mph limits in all urban and rural towns, signage, footway and cycle track widening and clearance, spaces at bus stops and automatic green man phases at some controlled crossings. There was a survey for consultation but it’s closed.

Space for Distancing: What is your council doing?