With the 7th Pedal on Parliament looming, Sally Hinchcliffe, one of the original organisers, looks back at six years of grassroots protest

In two months’ time we will be gathering en masse in the Meadows in Edinburgh (and  in Inverness and Aberdeen) for what will be the seventh Pedal on Parliament. In the years since we first had a mad idea on Twitter for a mass ride on the Scottish Parliament, we’ve spent every spring in frenzied activity as we make all the preparations involved in holding a mass protest ride.

But has it been worth it? Why do we do this to ourselves, year after year?  I’ve just come back from a week in London where, over the same period of time that we’ve been running PoP there has been – in places – real progress made to make the city’s streets more friendly to cycle in. In the time that TfL has built a couple of real cycle superhighways and overseen two ambitious Mini Holland plans in Outer London boroughs – what progress has Scotland made? And what part has PoP played in that? And why are we carrying on?

On the first question I think we can say that some progress has been made. Last year’s announcement doubling spending on active travel for the lifetime of the Scottish Parliament has come on top of steadily rising spending for cycling and walking – bearing in mind that when we first Pedalled on Parliament, the government was threatening to cut spending on cycling (in the end the cuts were reversed). The spending isn’t everything – and it’s still not enough to deliver the sort of transformational change that has been shown to work in London – but it is a real marker of the increasing importance the Scottish Government place on active travel in general and cycling in particular.

Spending that money, and spending it wisely, is going to be the next challenge. This means building infrastructure that everyone can use. We’re starting to see this on routes like the South City Way in Glasgow – but it’s not universal. There’s still too much cycle provision that consists of little more than paint and hope – not the sort of infrastructure that will tempt people onto bikes.

Has PoP made a difference? We think it has. We’re told that it has pushed cycling up the agenda in the corridors of power – and we also think we’ve changed the way that cycling and cyclists (or people on bikes) are perceived. When we can muster thousands of people for PoP from kids on balance bikes to visually impaired adults on tandems, to roadies in lycra, to women wearing hijab under their helmets – then policy makers have to think again about the sort of people they think they are designing for. We’ve also seen a new unity among cycling and walking campaigns, exemplified by We Walk, We Cycle, We Vote (which PoP was involved in forming), and revitalised local campaigns as people realise the power of taking to the streets, whether it’s campaigning to improve plans for a new Byers Road in Glasgow, or to reinstate physical protection for cyclists on Leith Walk in Edinburgh.

So why do we still need Pedal on Parliament? Can we hang up our pandas and rest on our laurels now? Sadly not. Scotland is a large country and most of the progress we have seen is happening in the central belt, and even then only in patches. We’ve seen local backlashes  against the Bears Way in East Dunbartonshire, Holmston Road in Ayr, and Edinburgh’s Roseburn route. The case for cycling needs to be made again and again at every level, because the benefits don’t always seem obvious to those who don’t already cycle, and the belief that losing space for parking and for cars means losing business and convenience looms large in the minds of politicians, shopkeepers, and the general public. By getting out there in great numbers, in all our wonderful variety, from every corner of Scotland, we’re reminding the powers that be that there is another way and that there is widespread support for cycling well beyond the usual suspects. That’s why we ride in Edinburgh – and Inverness and Aberdeen. That’s why we keep on Pedalling on Parliament.

Six years ago, we had no idea what we had started, or even whether anybody would turn up. Every year, I feel a bit of that same uncertainty as we head down to the Meadows to see who else will join us this time. But now we know that all the effort is worth it. Together, we can, we will, we are, making Scotland into a cycle-friendly country, with towns and cities that put people first. 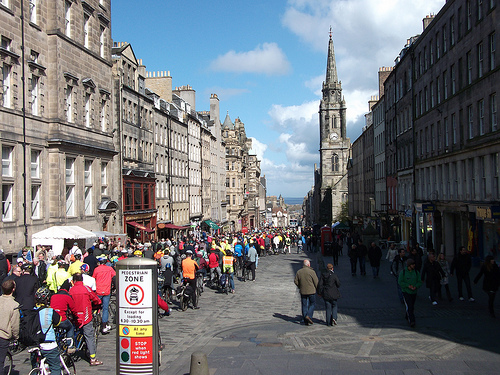 Six years on – what has changed?