Three party leaders and a government minister joined thousands of cyclists and marchers – including seven partially sighted ‘stokers’ on tandems – to keep active travel on the political agenda in this year’s Holyrood election in Edinburgh and Aberdeen. For a short hour, bicycle bells and human voices replaced traffic fumes and the roar of engines as the historic heart of Edinburgh was taken over by the colourful throng which included families with young children and disabled cyclists riding adapted bikes.

The fifth Pedal on Parliament, calling for safer cycling and walking on Scotland’s roads brought record numbers from all across Scotland with feeder rides coming from Glasgow, Peebles, Kirkcaldy and Cumbernauld, converging on the Meadows in Edinburgh. Visually-impaired cycling club the Talking Tandems had braved a forty mile round trip to lead out the ride alongside party leaders Kezia Dugdale (wearing a Pedal on Parliament t-shirt), Patrick Harvie, and Willie Rennie – who had also cycled in from Fife.  A simultaneous ride in Aberdeen brought 100 cyclists onto the roads from Hazlehead Park to Marischal College.

At the Parliament building in Edinburgh the rally was addressed by speakers from across the political spectrum. Addressing the crowd, Transport Minister Derek Mackay joked “This is the first time I’ve ridden in Edinburgh and if re-elected I’ll tarmac the cobbled streets.” More seriously he said  “We will match current record spending on active travel, revisit the CAPS and implement the walking strategy ” He reaffirmed the government’s vision of 10% of journeys by bike by 2020.

Speaking ahead of the event, Sarah Boyack said, “A Labour Scottish Government will put cycling back on the agenda. We know investing in cycling is investing in public health and the environment, making our town and cities cleaner and more active. We need sustained year on year investment nationally and locally to create the safer routes that will encourage more people to cycle.” At the parliament she said “10% of journeys cannot be reached without investment – Scottish Labour will invest in health and active spending and integrated transport – we will bring more space for cycling in our towns and cities. We need to invest right across our transport networks -including in active travel. We will work towards 10% of funding for active travel” 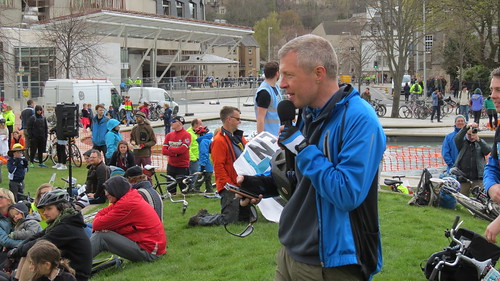 For the Liberal Democrats, Willie Rennie said, “I want to make a firm commitment for the Lib Dems of an extra £20million of spending on active travel to meet that 10% of journeys by bike because it’s not enough now. We can make a change now and reach that target. ”

Speaking for the Conservatives, Miles Briggs referred to images of a taxi driver assaulting a cyclist and said, “We need to develop a safe network for all road users be they on two or four wheels. Scottish Conservatives want to see investment in active travel and the development of at least one segregated cycle route in each Scottish city – linking outer city limits to the city centre.  At this election we are proposing a £100 million roads maintenance fund. Edinburgh has some of the worse roads in Scotland and it is time for action to make our roads safe. There is cross-party consensus that we need to see more investment in cycling.”

For the  Greens, Alison Johnston said “It’s fabulous to see so many people here today – but isn’t it frustrating that we have to keep campaigning for the most affordable democratic form of transport there is – Scotland must do better and we need clear leadership.” She called for presumed liability and announced that the Green party would invest 10% of the transport budget on  cycling and walking which is essential if we’re remotely serious about making Scotland a country where cycling is the norm for short journeys. By making cycling and walking the easy options we can cut air pollution and improve public health.  Greens want 20mph zones rolled out in residential areas and we have a manifesto commitment to presumed liability.  The ongoing obsession with massive new road projects stops us developing an equitable transport system fit for now and the future.” 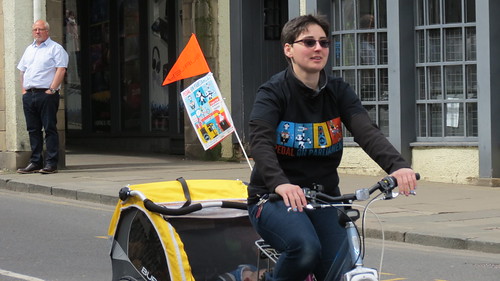 Denise Marshall, Pedal on Parliament organiser and new mother closed the speeches explained how she loved to cycle with her toddler but found the roads terrifying, calling for roads designed with people in mind, not speeding cars. “The funding increases we’ve seen are not enough – every day I experience close passes because people are human – we need to follow Sweden and introduce a goal of no deaths on the roads. ” 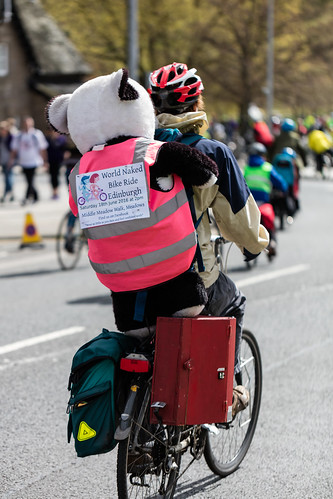 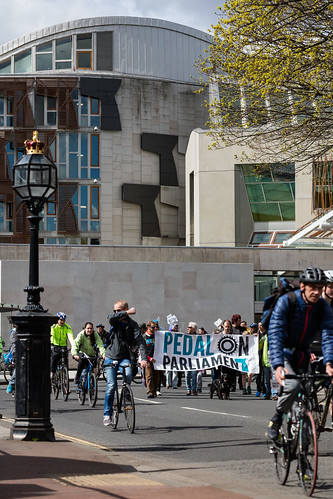 Pedal on Parliament keeps cycling high on the political agenda