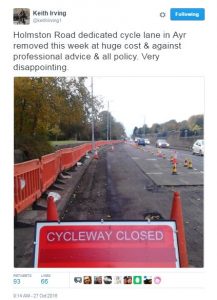 October was a dark month for cycle campaigners in Scotland with cycle tracks being removed in Ayr, bike lanes removed to make way for parking in Perth and the Bears Way extension being voted down. So we’re delighted by two statements from the Minister for Transport, Humza Yousaf, which suggest that – slowly and by degrees – the Scottish Government is starting to ‘get it’ even if local councillors are proving a little slower on the uptake

First, in Parliament, in response to a question from Neil Bibby (Lab) he said, “I think that segregated cycleways are an important part of realising our vision for active travel journeys and for 10% of journeys to be by bicycle by 2020”

We feel that this represents a major step forward in the language from the Scottish government, in understanding that creating the sort of conditions that enable everyone to cycle safely and pleasantly is key to them actually doing so.

As promised, the minister has also announced today that the government will be doing more to work with local government to ensure this vision comes to pass, announcing a task force led by Transport Scotland. In the minister’s own words:

“As this Scottish Government is investing record amounts, I want to be certain that public money is invested wisely and that barriers to more effective delivery are understood and overcome. Too often bold visions get bogged down in the delivery.
“I am determined to make this task force work through local democracy and in doing so ensure better community consultation, better communication and ultimately better active travel [walking and cycling] infrastructure that is good for local economies and communities. It is only by working together we will be able to deliver a 21st century cycling infrastructure that befits our ambitions for healthier, more prosperous communities who are less reliant on the car as a mode of transport.”

We applaud these words and the fact that the Scottish government is actually backing them up with action: taking steps to protect its vision, and to bring local authorities – and, more importantly, local communities – along with it. Perhaps, just perhaps, some good will come out of October’s dark days – not just more ambitious cycling schemes, fantastic though that would be, but real understanding across the board that by humanising our streets we can create towns and cities that work for everyone.

And if that all sounds a bit too starry eyed, the Scotsman article ends with another quote which may give the government a wee hint as to what might convince local authorities of the magic of cycling infrastructure. It’s no coincidence that the council which won this year’s Community Links Plus competition has no plans to give any of that tasty cash back:

Frank McAveety, Glasgow’s Labour leader, said: “Other councils need to do whatever they think is right for their communities, but Glasgow won’t rip one up one metre of its cycling infrastructure – and we will keep building quality segregated routes just as fast as we can get our hands on the funding.”

In other words, substantial government money does seem to have a way of overcoming all those fears about congestion and loss of parking. A task force is great – but a task force tasked with spending a substantial proportion of the transport budget on active travel would be awesome.