Henry Whaley, one of the Pedal on Parliament organisers, started campaigning because of the conditions on his daily commute. His story makes it clear just how much effort goes into campaigning for the simplest improvement to our roads

It all began 3 years ago when a colleague set up a Bicycle User Group (BUG) at work to help us, the regular cycle commuters, to better communicate between ourselves and our employer.  This was a major step forward for us as we could decide what was important to us. Finally, the years of snippets of changing room grumbles could be combined into a single approach to the company.

We had some good successes in the first year:  dormant lockers reassigned and new lockers purchased eliminating the two-year waiting list, tidying up the drying room and replacing the polished concrete surface in the basement with an anti-skid one.

We also ran a roadshow at the start of spring to encourage more colleagues to take up cycle commuting.  We got some great interest but one of the main barriers that we were given was not knowing a safe route to the office.  We had a SPOKES map on the wall showing the routes the current cyclists take, which helped, and with the very safe (& pleasant) canal towpath being within 1 mile of the office we should have been okay, but the problem was the last half mile along Gogar Station Road (GSR), which was putting people off.

GSR is a narrow and windy road just outside the bypass with a 40 mph limit. It is used as a rat run at rush hour to avoid the queues on the bypass, and an access road for a large chicken farm & scrapheap.  This in itself would make it pretty hostile for cyclists; however, it also had a terrible road surface whose bumps and cracks take a lot of concentration to avoid being jolted around too much.  Dealing with one or other of a terrible surface or aggressive traffic would be bearable but trying to both was truly scary.

Here’s an example of it one evening.  On the dark winter commutes this is a far scarier experience as you can’t see the bumps.

To me and the other cyclists it was a clear example of a road that needed fixing, both for those who currently cycle it regularly ,and to enable those who wanted to cycle to do so safely.  It wasn’t exactly a pleasant experience for car drivers either.  There had been previous patching jobs but they had deteriorated so badly they were part of the problem.

So having spent a lunchtime encouraging others to cycle, it dawned on me that if it was going to get fixed I had to take it on.  This was the start of my letter-writing campaign.

It started with a few letters to my councillors (and encouraging our BUG members to do the same) and getting the (relatively) standard response of them passing it to the roads department and the roads department saying that it didn’t rank high enough for inclusion in the current year’s programme.

I found it hard to believe that this was the right answer so I pressed on with my campaign and through a councillor secured a meeting with the Vice-Convener of the Transport Committee, in whom we found a sympathetic ear, but again just a commitment to look into it.

The road was reassessed but still came back with too low a score to be considered. This low score led me to question the prioritisation policy, which I got hold of on the council website (you can download it from here if you’re interested).

There was no specific reference to the use of roads by bicycles.   It talked of “vehicles”, and “drivers”.  Assessments took into account “drivers’” uncomfortable journeys & the risk of injury to pedestrians, but the policy was silent about cycling.  There were extra weightings for bus routes and city centre streets and without these it looked likely that GSR would never get fixed.

There was meant to be an additional weighting for high cycle usage roads, as per a consultation with SPOKES in 2010, but this didn’t appear in the latest version. And to really rub salt into the wound, when we looked at the roads that were prioritised, on the list was a dead-end road (used primarily as a layby), not half a mile away from GSR.

This really got me wound up and so I applied to make a deputation to the council’s transport committee which was agreeing the roads to be resurfaced in the next year.  I attended and set out my arguments and showed pictures of the state of GSR.  I got a commitment from the Convener that it would get sorted in the following tax year.  They also confirmed that they were looking again at the prioritisation policy.

So far so good – but it wasn’t clear what ‘sorting’ it out would entail. We had a meeting with the local roads officer who came to see the road to look what they should do in the short and medium term.  He advised that the lumps, bumps and cracks in the surface weren’t deep enough to count as a ‘pothole’ and so weren’t being picked up in their surveys to be fixed. There’s a minimum depth of a pothole apparently.  He agreed to do a bit of patching but wasn’t keen to do too much as it would be wasted if they came back and resurfaced it.

We had various promises of when we would see plans, but dates kept slipping.  I kept the BUG informed and encouraged them to keep writing as well.  We hoped that that first winter would be the last one dodging bumps in the dark. We eventually heard that we would be getting a full resurfacing the whole road, and our thoughts turned to the layout.  Having read up a bit and got some advice from fellow cyclists on citycyclingedinburgh, the idea of not having a centre line and cycle lanes came forth as a design worth pursuing.  The problem was that it hadn’t been tried on this sort of road or by this council – they warned us that they would need to do a safety audit which would highlight risks with the design that they may not be able to mitigate or accept and as there had not been any recent cycle casualties, they would have to be very careful that they wouldn’t be held accountable for any future incidents due to the layout.

Again it was back to the BUG to get more letters asking for it to be considered – and pointing out the continuing delays would mean another dark & dangerous winter of commuting on the poor surface. Whilst we weren’t happy with the delays, we got word that the safety audit had been satisfied and so ‘our’ design was seriously being considered.

The consultation finally arrived and to our delight had no centre lines and cycle lanes both sides.  Last big push on the letter writing calling on the proposals to be implemented as planned and we were nearly there.  The result of the consultation was very positive and only a couple of minor queries on parking restrictions and passing farm traffic.

Things started to get very exciting when the road closure signs went up.  We managed to get dispensation to still use the pavement to get past the works whilst they were going on, so we could get a daily view of the work being done.  We had 5 weeks of the road being closed which was great to see what it was like without cars – near the end when it was all but done it was total bliss. 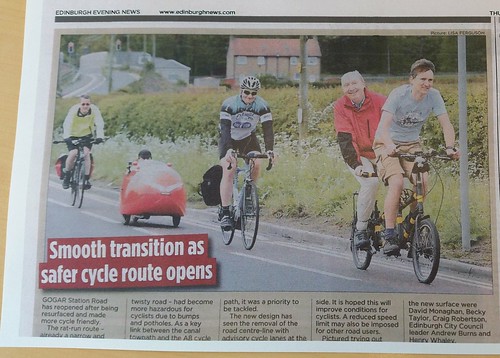 The road is now open.  We even had a little party to celebrate and invited the councillors and had the local newspaper along. 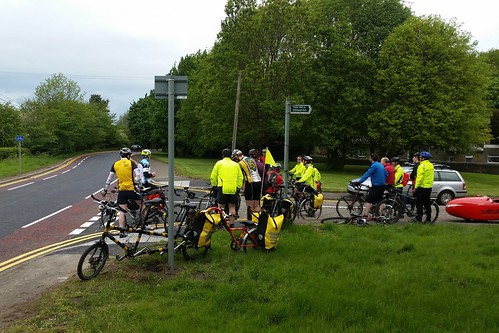 The surface is fantastically smooth and much easier to keep a steady pace and steady line, which makes handling the traffic easier.  Here’s a video of what it is now like. Anecdotally, the traffic speeds appear to be lower and close passes much reduced.

It’s only fair to mention that there has been some scepticism to the layout we now have.  The arguments against it are that it is ‘just paint’ and ‘it encourages driver to drive in the cycle lane and cyclist to be in the gutter’ and we should have campaigned for something ‘better’.

I’ve said all along that resurfacing the road was our priority and that has made a big difference.  The layout could have had the centre line reinstated, which would have just encouraged higher speeds now that the surface was smoother.

Alternatives, such as chicanes & speed bumps which have traditionally been installed bring their own brand of conflict between vehicles & cycles.  Yes, it would have been fantastic if the road was made a one-way or no-through road, but that would have been much more controversial to get through the council.  The current make up of road users is heavily weighted to cars and without any casualties there is little to spur the council into a more ambitious scheme.  Convincing them would have been a much harder and longer campaign.

The layout we now have makes it very clear that cyclists will be on the road.  Yes, there is uncertainty as to where to position yourself and vehicles will need to enter the lanes to be able to pass each other and, yes, some drive in them all the time. To me the proof is in the speeds and number of close passes that cyclists have to suffer and whether it doesn’t put off as many to start cycling.

Time will tell how everyone adjusts to the layout and whether it will change anyone’s opinion.  The council are keenly monitoring it, so we will get some data and hopefully there will be more cyclists using it to share their views.

As it is, I think we should be treating it as a success. We have made the a big improvement for cyclists for minimal cost to the cycling budget  (the resurfacing came from the main Roads Fund) in a not unreasonable timeframe and more importantly  we didn’t have to wait until there was a casualty on it – what we feared the most!

And in other good news, the local council have now added a weighting to the resurfacing prioritisation for roads on cycle routes.  A big win to help roads with similar problems and through no small effort from Spokes

Since starting this campaign, I have seen the power of making cyclist’s voices heard and now help organise Pedal on Parliament and have joined our Council’s Cycle Forum.  It’s not easy to get things changed but it can happen if you are determined and show the politicians that this really does matter.