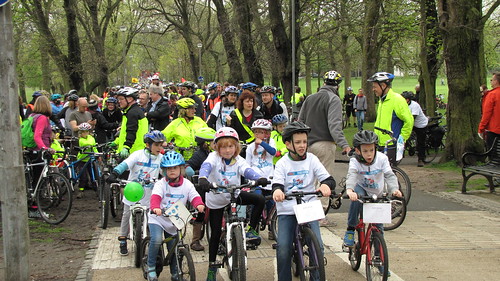 Families were to the fore at Pedal on Parliament this year, with a throng of parents and children joining politicians and marchers to lead off the mass bike ride on Holyrood. Even Transport Minister Keith Brown, a last-minute addition to the roster of MSPs, MPs and councillors who had accepted their constituents’ invitation to take part, took to two wheels on the day. The newly installed bike counter on the Meadows cycle path was quickly overwhelmed by the thousands of bikes of all shapes and sizes, with organisers estimating more people joined them than last year , when 4000 pedalled on the parliament, including a substantial contingent on foot, led by the McNicolls, founders of safer cycling charity Andrew Cyclist. The colourful crowd filled Edinburgh’s Royal Mile and it took half an hour before the last rider left the Meadows to cover the short distance to the Scottish Parliament 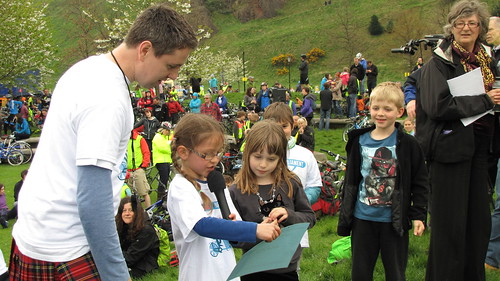 At Holyrood, children once more played a key role, with the speeches opened by Kyle Thomas (11), Daniel Brennan (8) and Katharine Dorman (7). Kyle said ‘I believe cycling is the future for Scotland… Cycling down the high street I thought to myself that this is how cycling should be, there wasn’t a single car on the road but lots of cyclists as it should be.’

Daniel said ‘I’d love to be able to go for a bike ride without going in the car to cycle with my family. It would be great if Scotland was like Amsterdam where everyone can cycle with their friends.’

Lynne McNicoll, stepmother of Andrew McNicoll, killed cycling to work in Edinburgh in 2012, said ‘ I was at the first Pedal on Parliament and to see so many more people attending today is just fantastic. The children have said it all for us – but I’m here because I don’t want anyone else to feel the way we feel every day since Andrew was killed on his bike.’ She urged everyone who attended to talk to their MSPs and get their support. 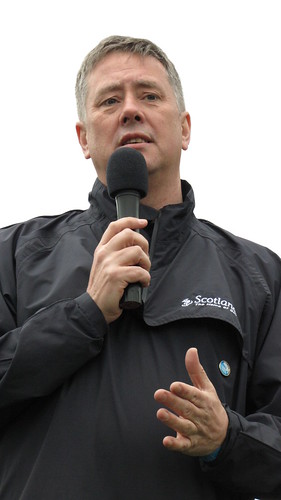 Replying for the government, Keith Brown said ‘We have to educate our children if we’re to make the network safe for children and their parents. We’re unapologetic about investing in education but it’s not the only thing to be done – we’re investing in safer routes to schools…. We are making progress on infrastructure with more than £32 million spent on infrastructure… It will take time for Scotland to become as safe as Amsterdam. We have to change driver behaviour as well… we need to have the same attitudes as Scandinavian countries aiming towards zero deaths.’

For the Greens, Alison Johnstone said, ‘This is a growing movement – and it strikes me every year that this is not a niche activity – everyone is here, young and old, fit and not so fit… Cycling will help us cut congestion, improve our woeful health record – it’s a solution to all the challenges we face. We shouldn’t have to pedal on parliament – investing in cycling is just common sense… I will come here every year until we see the situation in Scotland change for the better’

Lib Dem Willie Rennie said ‘As I was cycling up Queensferry Road on my bike I could not think of any more thrilling experiences – but it’s not an experience I’d like my son to share. .. We need to invest so much more in active transport this year and every year from now on.’

Labour’s Claudia Beamish said ‘I’m a rural cyclist who’s experienced how terrifying urban cycling can be. I have to keep getting off and walking – this situation needs to change… We need transformational change. I will push strict liability with my party. I want to emphasise that it’s about how the infrastructure is designed but segregated tracks along busy roads – it shouldn’t just be lines on the roads…. It’s about a good quality of life for the whole of Scotland urban and and rural.’

Councillor Cameron Rose, Conservative, said ‘There is a lot to be done, but we need to celebrate what has already been done, but London’s investment is more than double Scotland’s per head. We need to move on, step by step until Scotland is a good place for cycling.’

Chris Oliver from Road Share said ‘Presumed liability is a big ask but we need to protect the vulnerable road users, not just cyclists but pedestrians. Please look at what we’re asking for and support our campaign.’ 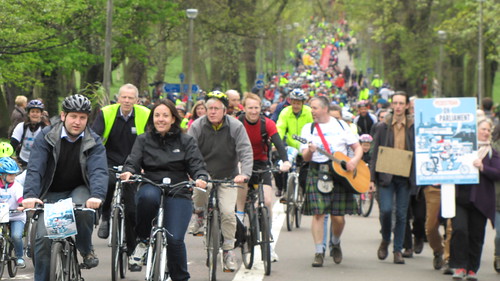 Families to the fore for the third Pedal on Parliament