We’re sorry to announce that Scotland’s transport minister Keith Brown will be unable to attend Pedal on Parliament on Sunday 19th May due to a prior commitment; we’re sure he’s a busy man. Nor can First Minister Alex Salmond, despite an invitation sent out many months ago by one of the younger POP organisers. It’s their loss, because apart from anything else Pedal on Parliament should be great fun, whether you’re coming from Inverness or just down the road and whether you’re on one, two, or three wheels, or just your own two feet.

But there is a serious point here. The Scottish government have told us that we’re pushing on an open door when asking for safer cycling – but whenever we look at the country’s actual spending priorities we get the distinct feeling that cycling is considered something marginal, something that’s a nice to have, that’s for a tiny minority, you know – the ‘cyclists’. Real people, the rest of Scotland, need real transport: shiny new roads, high speed train lines, maybe an electric car if they want to be green – and if there’s any money left over, then those strange people in lycra can have some of it, barely 1% of the transport budget last year.

We need to tell Mr Brown, and Mr Salmond, and everyone else in the Scottish Government that that’s not the case. We need to show them that we’re not just a tiny minority of cranks, but we’re everyone. We’re the roadies on £3000 bikes doing 100k at the weekend and the families with the mountain bikes on the back of the car driving to 7 Stanes. We’re the hardened commuters armoured up with helmet cameras fore and aft and the pensioners ambling down to the shops for the paper. We’re the mums with child seats on the back of their bikes dropping the kids off at nursery, and the dads pulling the kiddy trailers down the canal path on a Sunday afternoon. We’re the people driving to the gym to ride on stationary bicycles because the roads on the way are just too scary to contemplate, and the children looking wistfully from the backs of cars on the school run because their parents can’t let them take the risk of cycling to school. We’re the people who go out on a sunny weekend once in a while and the year-round committed cyclists with ice tyres and snow in their beards. We’re the partners who worry while their loved one is late coming back from their ride – and the families whose loved ones never did come home. We’re not ‘cyclists’, we’re people. And more importantly, we’re voters.

Together we can make Scotland a cycle friendly nation. 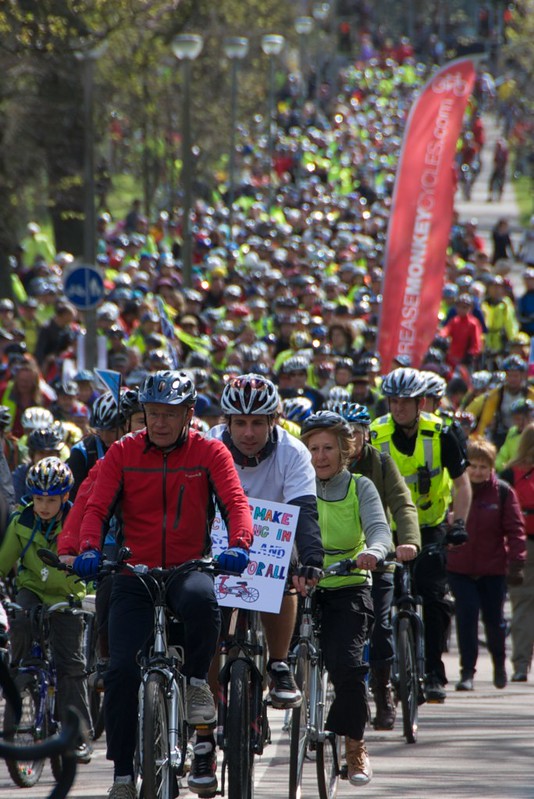 Can we make cycling visible from Holyrood?