You wait years and years for some possible segregated cycle infrastructure and then two plans come along at once! We’ve already discussed the Roseburn to Leith Walk, which you should be coming out in support of if you are based in Edinburgh. However, there is a similar consultation going on over in the west, with the proposed Phase 2 extension to the Bears Way cycle lane in East Dunbartonshire.

One of the POP team, Dave Brennan, went along to a stakeholder ‘Design Forum’ meeting last week. He reported back that there are three options on the table; a shared use path on the east side of the A81, a two way segregated route again on the east side, or a third option of a mix between segregation and shared use. Unfortunately the ideal option of, ‘with flow segregation on both sides of the road’, has been dropped. This option has been dropped due to traffic modelling issues, the need to remove a lot of parking (which would unfortunately be a pill too big to swallow for this particular consultation), and difficulties in connecting to the current phase.

Whilst option 4, ‘two way segregated route again on the east side’ is a compromise, we think this represents the best option on the table for the people of East Dunbartonshire and will, if the detailed design is produced to a high standard, will provide infrastructure that will enable cyclists from 8-80 to take to their bikes.

Two public meetings are planned on the 1st (6pm) and the 7th (7pm) September at Milngavie Town Hall. We urge our supporters in the area to please attend these events and let their views on the scheme known.

Whilst at the stakeholder meeting Dave heard comments from locals suggesting they were not happy with the introduction of the lanes. One resident suggested that children should not be cycling along the A81, and should cycle on back roads instead. Another suggested that narrowing of the roads (no lane loss) would be a disaster for the area, and that ‘hardly anyone uses the lane anyway’. Some were angered that there was a consultation on phase 2 at all, despite being previously angered in the past about ‘not enough consultation’, something that the local paper thought was important enough to place on its front page. Attitudes like this and possibly worse are likely to abound at the public meetings. 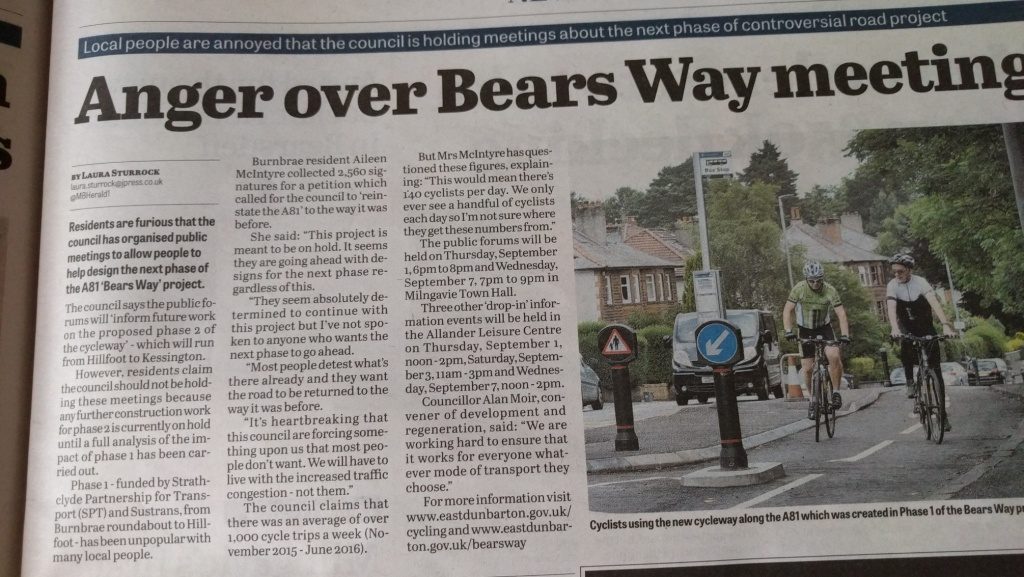 Please, if you can, come to the meetings and raise your voices in support of phase 2. Dave will be there representing POP, but we need your help. With your help, we can make Milngavie and Bearsden people friendly towns.
Bears Way consultations: have your say