As the new Scottish Government ministerial line-up is announced, we congratulate both Derek Mackay on his promotion to Cabinet Secretary for Finance, and Humza Yousaf on his appointment as Transport Minister. Clearly Transport is a stepping stone to greater things for rising young politicians in the Scottish Government. It may not seem like that glamorous a post but we contend that it’s an area where an ambitious minister with a strong vision can make a huge difference to the people of Scotland – with no need for any greater powers from Westminster.

Yousaf has placed a lot of emphasis on social justice and inequality over his career and as a Glasgow politician he must know how unfair it is to have a transport system that privileges the private car. Just half of all Glasgow households have access to a car – yet 100% of them have to breathe in the pollution those cars generate, with the poorest areas often hardest hit. The more roads we build, the more traffic we generate. That traffic will end up damaging our health in ways we don’t yet fully understand, and making life more dangerous — particularly for those who don’t have the option of just getting in a car. 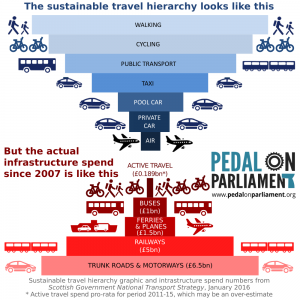 As the grandson of a bus driver, we hope that our new Transport Minister will understand that his job cannot just be about building dual carriageways and cutting air fares if he wishes to benefit all of society, not just the wealthier half. He needs a transport policy that also benefits the shift worker cycling home in the small hours, the single mother getting her kids to school, the families living on polluted streets used as traffic rat-runs, the pensioners who are no longer as nippy on their feet as they used to be.

Money will be tight over the next parliament – but that makes it even more important to invest the money we have wisely. Fortunately investment in active travel pays back massively compared to any investment in the roads or even in rail. Combined with policies to encourage local authorities to make active travel the easiest and most pleasant option for shorter trips, such investment can bring about a transformation in the lives of the people of Scotland, rich and poor.

We hope that Humza Yousaf will see his tenure as transport minister as more than just a stepping stone to higher office, carrying on business as usual. We would be delighted to meet with him to explain how he can spend the next few years creating a genuine and lasting legacy – and one that could transform all of our lives for the better.